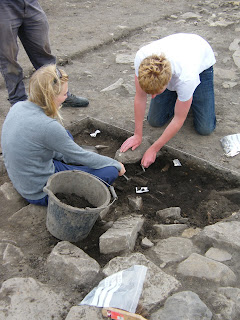 Today the majority of the planning was completed which will allow us to crack on tomorrow with further exploring the barrack block, which is where we anticipate moving most of the excavators. Today, the large dark feature which had produced the bone and fragment of antler produced more late Roman looking pottery, which was very encouraging (and crucially, no medieval material); so far this is our best candidate for a late/sub-Roman feature. Elsewhere, work continued on defining what was happening closer to the rampart. Evidence for stretches of walling continue to appear, though the alignments of each individual stretch varies, so its not clear whether they are part of a single feature or fragments of a series of building built close to the edge of the fort (possibly of late date).
Posted by David Petts at 12:26