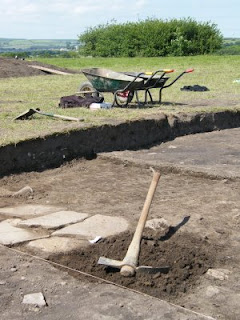 Its the end of the first week and a good chance to review the weeks progress. The first thing to say is that the site is much more complicated now than when we started, though this is a good thing. What appeared to be a relatively simple rectangular stone building has proved to be complex and hard to understand. Although we are still cleaning back and defining it, it is clear that there are many phases of surfaces associated with it. It has also been robbed out in places. There also seem to be places where possible post pads have been cut into the walls. Are these real? They certainly bear a passing resemblance to similar features associated with the post-Roman re-use of the Roman granaries at Birdoswald. However, dating them will be a challenge; the early medieval period in the North is a-ceramic and lacking coins, so these features are likely to only contain residual Roman material.

The structure we initially thought was a ballista platform is also far more complex; we now have a hypothesis that the layer of cobbles that covers this area is actually an artefact of ploughing causing the natural sorting of rocks within the soil. Beneath this cobbled layer, however, is at least one structure of uncertain date.

The real work is still to come- although we've come a long way in cleaning, refining and defining the features beneath the topsoil, we've made very little progress in starting to excavated these features. Even in the centre of the barrack block we're still recovering large fragments of late medieval pottery which shows we are still removing the base of the topsoil (though I'm not sure we've resolved the issue of where the pot is ultimately coming from).
Posted by David Petts at 11:06