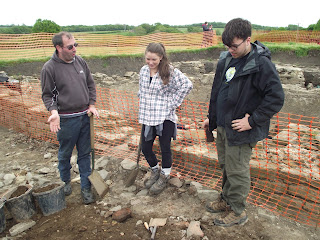 Back on site today for our final season. We started with seventy of our students - our volunteers join us tomorrow. The first part of the first day is always chaotic - we have to site inductions, sort out the fencing, introduce the workers to their tools and do some general site housekeeping. However, by mid-morning, we were working solidly.

In Trench 1, the focus has been on two key areas. First, we are looking at the areas running along the northern edge of the trench, including the exterior of the corner  tower and the latrine. Currently, these have not been keyed in with each other, so we are trying to come down to a common level across this area so we can tie our stratigraphy in more clearly. We've also attempted to clear up the remaining layers of soil that lay to the south of our northern rampart. The new team did great work, moving lots of soil, and exposing more surfaces. Meanwhile, we are also trying to clean up the interior floor levels of the barrack. These were left at varying heights at the end of last season. Today, we had small groups in each compartment exposing the cobble surfaces consistently across the building.

In Trench 2, we only had limited work going on inside the bath-house. Given the fact that we only have seven more weeks to go, we've decided that we are more or less happy with the state the structure has reached and are going to limit are work on its interior. The exception today was the removal of a row of the floor slabs along the east side of the main room, just to give us a quick view of the underlying deposits. This has not revealed much beyond exposing in a bit more detail the nitty gritty of the plunge-bath construction. Just at the end of the day we also started a little small-scale furtling just to better understand the constructional sequence of the external steps up to the porch. In the corridor, we had a small group of second years doing a little bit of environmental work- cleaning up and drawing a section and doing sampling for magnetic susceptibility which will help us characterise the nature of the interior fill deposits of the bath-house.

Most activity is focusing on the areas to the south and west of the bath-house, where we want to focus on better understanding the growth of the street layers and external deposits that encase the bath building. These so far have revealed new surfaces, as well as revealing more of the boundary wall of the bath compound.

Plenty of nice finds- highlight include a nice Rhineland lava millstone, a beautiful jet ring and a nice copper alloy spoon, as well as all the usual pot and bone. 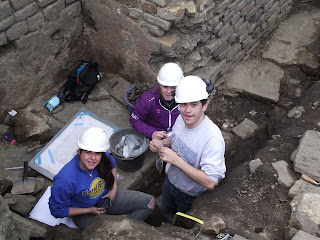 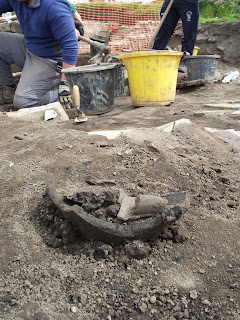 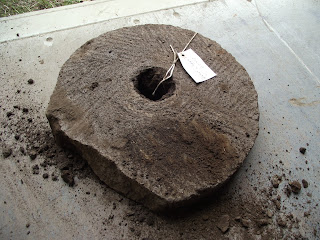 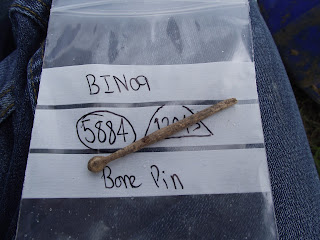 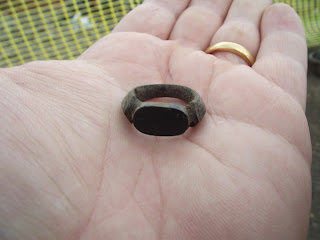 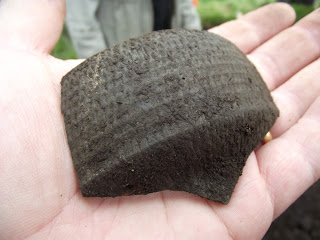 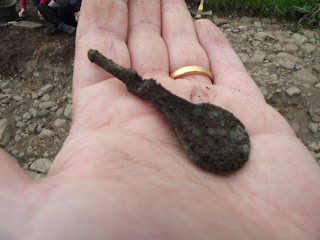