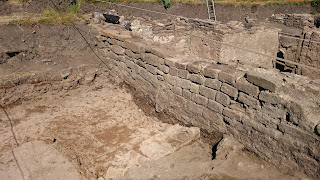 Another day dominated by planning but that does not mean that there weren't some interesting new developments.

In Trench 1, the focus of interest continues to be on the strip along the northern edge of the trench. Here, a gallant team who have been slogging through intractable cobbles hit a stone kerb, which clearly marked the edge of the intra-vallum road. Whilst we have always assumed that there would have been a road along this edge, this is the first time we've found clear evidence of it. It also helps make sense of the network of gullies we have in the north-west corner of our trench - it now seems that some of them are the same as the 'sleeping policeman' type gullies we have crossing the road along the eastern side of the trench, which also drain the water into a more substantial drainage gully. This all serves to emphasise the complexity of the water management system within the fort. 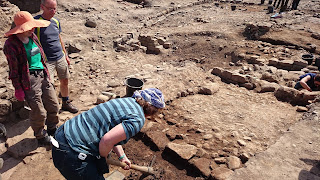 In Trench 2, our big surprise was the appearance of another bit of mystery wall! This time running west-east from the western wall of the bath-house. Although we haven't clarified its course yet, it should intersect with our new stretch of wall reported on the other day. My changing room hypothesis has lasted roughly 12 hours! I think it more likely, as Jamie has suggested, that we may have the remains of a porch, as the walls seem to relate to a blocked up doorway in the main bath-house wall. Both new walls are noticeably at a lower layer than the other walls we have found so far, but give the assumed depth of the original land surface, they must both still stand several feet high.
Posted by David Petts at 12:46