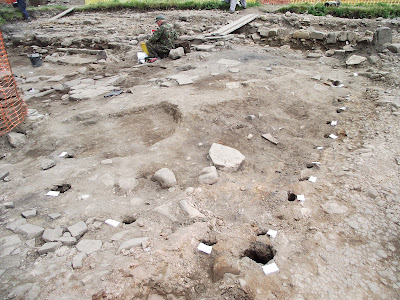 Nearly the end of our third week, and out last full day with the students. Although the weather was overcast and a little chilly, we continued to make good progress.

In Trench 1, the team looking at the new northern stretch of road have now revealed a clear kerb/gully on the north side and need to focus on clearing the stretch between that and the northern trench edge (which doesn't quite reach to the curtain wall). In our section through the side road, it is still unclear whether or not the dark, damp layer is related to an early fort phase or not- whatever it is though, it is very different from the overlying layers of compacted road surface. Within the barrack, lots of post-holes, lots of cobbles, lots of recording...

In Trench 2, work in the bath-house was focused very much on recording and cleaning up for photographs. A similar situation was to be found to the west of the bath, where the porch was being recorded, and earlier layers of road surface were being revealed and recorded. To the south of the bath-house, the roadside features are coming up nicely- we now have what looks like a stretch of roadside walling. It could simply be a well constructed gully, but it does appear to be structural. I think it is unlikely that we have another structure squeezed between the bath-house and the road, particularly as the front aspect of the bath-house contained a series of windows which would have been blocked in by a stone structure with walls like this. My current hypothesis is that it is a northern boundary wall similar to our western boundary wall- serving to mark out the bath-house compound.

In the area to the north of the road and south of the bath, we have another possible structure. Its walls are very poorly defined, but a crude line of stones seems to define a possible clay floor surface. Personally, I remain unconvinced - I can't see how the stone settings could be structural; my best guess is that it marks a working area or outside activity area rather than a proper building. Hard up next to it to the west is the evidence for something more structural. This new building is defined by a series of the strange stake-holes that we have been spotting this year. These are voids rather than containing fills in the way a traditional post-pipe might. Nonetheless, they are clearly structural and 'real' rather than being natural features (see image at the top of the page). The lines are straight, the gaps between them are consistent and the whole assemblage is clearly aligned on the road. This is the first time we have found clear evidence for a structure without a stone foundation or superstructure and a reminder that even at a major site such as Binchester, simple timber structures were to be found around the more substantial stone buildings. 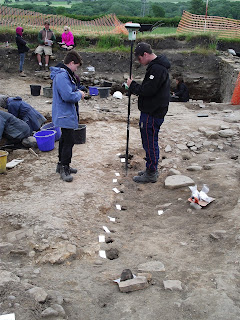 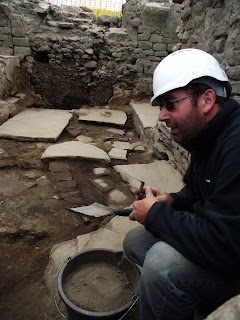 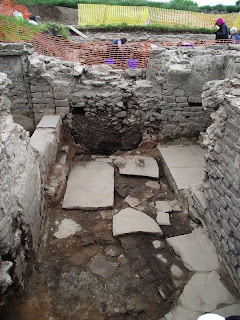 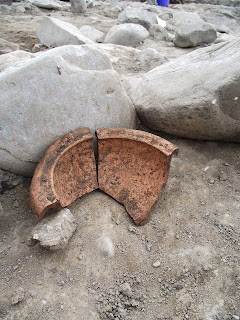 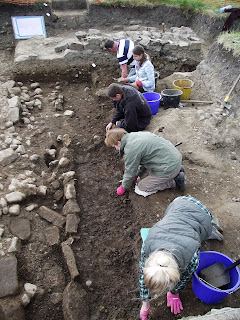 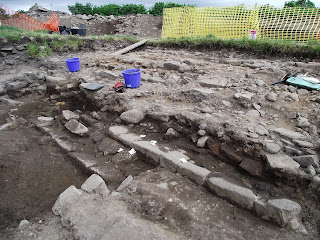