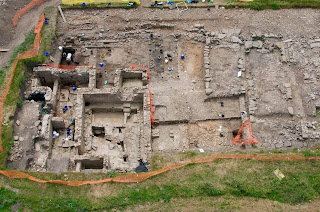 A stinking hot day today, but all the diggers persevered through it and we made good progress despite the sun - tomorrow is set to be even hotter though; I think I might have to do a lolly run.

In Trench 1, as yesterday, the focus is very much on the barrack interior. Following on from the last blog entry, we have done good work tying the interior of the building into the road sequences and other features outside.We now have two cobbled surfaces that cross beneath the barracks wall and must be related to a pre-barrack phase of use of this area. We have also started to uncover a large area of fire reddened flag stones; this is certainly more than a simple hearth and seems to indicated a big period of burning. It will be interesting to see if evidence for this burning comes up elsewhere. Was the wooden barrack destroyed by fire? 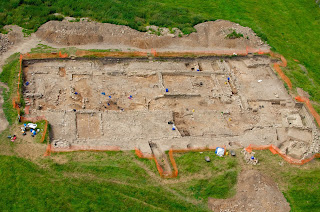 In Trench 2, the biggest excitement was in the bath-house corridor. Whilst probing in the floor area at the northern end of the corridor, we have identified a probable hypocaust pila made, as is typical, from a pile of stacked ceramic tiles. Although ever since we found the flue tiles embedded in the southern wall of the corridor, we have suspected that we might have an underfloor heating system in this area, this is the first time that we have actually found direct evidence. Presumably this extends beneath the entire floor of this compartment and was presumably extended when the southern extensions were built. In this southern end, we also probed the floor area more, and can now clearly see that opus signinum is laid  across the floor in the extensions, with the later flag stone floor and integral culverts built up over this floor. This seems to suggest that initially the entire southern end may have been one plunge bath, before being cut down and turned into a smaller plunge bath and changing area.

In the area to the south of the bath-house, there has been lots of recording in the slot being dug by Morris and Michael ("Tom"), particularly getting the section drawn. To the west, in the metal working area, just at the end of the day, Laura uncovered a flagstone surface beneath the dense spread of burnt material she had been excavating. This surface appears to run up to a wall line within the wooden structure. It is not, as yet, clear whether this represents another building, or perhaps a well-constructed smelting hearth - it should all come out in the wash over the next few days.

Finally, one of our 2nd year students, Darren Oliver, had the chance to experiment with the drone he is working on today- although this was his first test flight at Binchester he was able to get some great aerial shots of Trench 2. We look forward to seeing more! 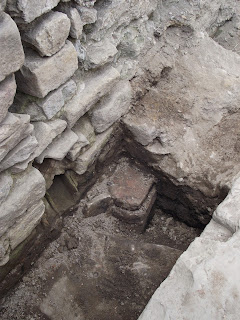 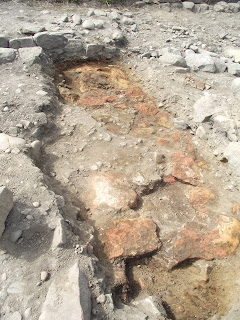 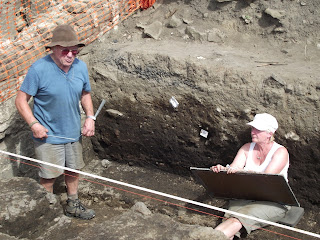 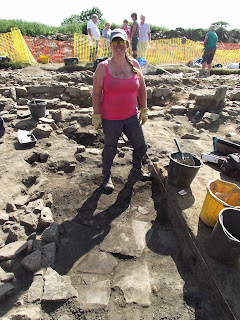