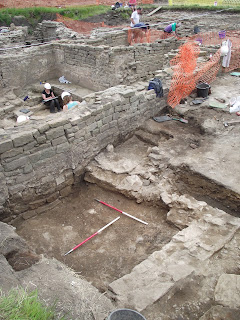 A sunny end to our second week on site. The good weather has really allowed us to make great strides in picking apart the site.

In Trench 1, interesting features are still coming up in the barrack interior; highlight today include completing the cleaning of one of our drains for horse pee. One of our volunteers also revealed the nicest and clearest sequence of post-holes we've had yet - no packing stones, but clear nonetheless. Possibly part of the earlier barrack or a wooden partition for one of the later structures.

In the northern strip of this trench, the road surface continued to be revealed, although the stone lined feature did not end up being a cross-cutting drainage gully - at least as far as we can tell. Instead we have a fairly amorphous area of large stones. It is possible this is an earlier feature poking up through the road surface. One intriguing aspect of this improved understanding of the road is the fact that it was cut on a significant scale by our large water-hole (Hilly's Pit) - it would have effectively prevented an unimpeded circuit round the fort. When was this pit dug- we have some 2nd/3rd century C14 dates from it, but cutting through the layers of the fort interior, I would suspect a high degree of potential residuality for any material from within this feature.

In Trench 2, there are now just a few final elements of internal fill to remove from the corridor. Once that is complete we just need to remove the final small bulk near our blocked doorway/window and then clean up for recording. We are debating the value of trying to remove some of the late (but very large) floor slabs to get a better sense of the earlier sequences in the building. In front of the building to the north of Dere Street, we are just getting the first hints of a large crude stone setting appearing within the dark layers we are clearing back. It is not clear whether it is anything structural or just a poorly defined working area.

More clearly structural are the new walls to the west of the bath-house. As hypothesised yesterday, this have been cleaned up to reveal a porch with a south entrance. There is a nice threshold by the blocked doorway. Surprisingly, this threshold is at the level of the top of the internal stone bench - are there some steps built into the bench or removed when the doorway was blockded? The blocking was pretty thorough, as it is apparent that internally and externally the opening was plastered over. This differentiates it from the superficially similar looking porch at the south of this room- though this was a little cruder in construction and was sited by an opening knocked through a former window. The other key difference is that whereas the south porch survived to the same height as the rest of the bath-house, our new western porch was clearly demolished almost to floor level - possibly when the bath-house underwent its structural reworking- as it seemed to be sealed by a road surface containing structural remains seemingly linked to this constructional activity. 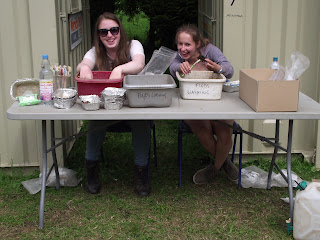 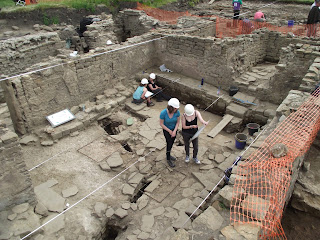 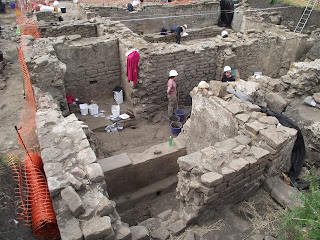 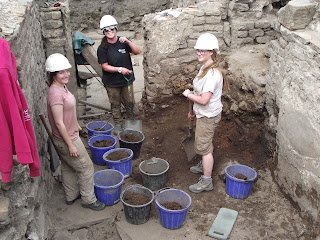 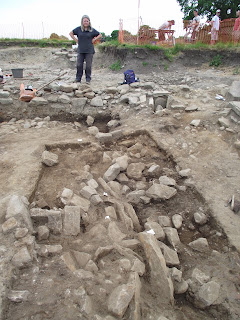 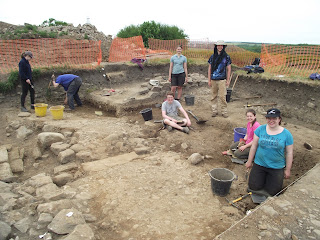