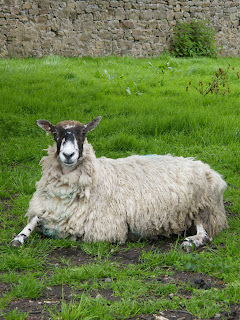 I was off site today - I was in York looking at the site archives for the impressive Roman building (possibly a bath-house) excavated on the site of Queen's Hotel, Skeldergate (York), where the walls survived in places even higher than ours at Binchester (over  3m in places!). I was working on this material as part of a project to re-assess the dating evidence for the important (but complex) Roman to early medieval transition.

As a result of my absence, today's report is from Jamie Armstrong- our Trench 2 supervisor

(Conversation in the van on the way home)

Jamie: Damn, I forgot to come and look at your trench today: did you find anything interesting for the blog?

A little low on numbers, but we still got plenty of things done. On the south side of the bath-house, near the southeast corner the trench Morris, John and Michael made good progress blitzing a sondage between the bath-house southern wall and the new wall which fronts directly on to Dere Street: for security reasons this trench shall be referred to as “Tom”, and we anticipate being beyond the wire (or possibly on a floor level) by Monday. There are some lovely soft deposits in this area, including a thick black layer of burnt material. The new wall was also found to have a stepped course, indicating we may be close to the bottom. Finds from this area included the base of a square glass vessel and a copper object, as well as the inevitable mounds of animal bone.

Just off the southwest corner of the bath-house further work by Laura and Margaret (helped by a late surprise cameo from Peter) has defined the deposits within the post-built structure. To the south of this, Steven has finished excavating a small stone-lined pit which has been filled with an interesting mix of burnt material intermixed with copper fragments. Several more crucible fragments were also found in this feature, to add to the ones found previously from the same area, indicating at least one focus of metalworking, although interesting there is no evidence of in situ burning within the pit itself.

At the northern end of the side road Graham and Jacqui were kept entertained unveiling the latest of a series of layers of stones in our excavation of a long strip between the west side of the bath-house and the very fine wall to the west. We should be in a position to record this and begin its removal tomorrow.

Within the bath-house, Sue and Karen have excavated a section through the floor to the north of the long plunge-pool in the changing room. As a result we now know  the depth wall of this plunge pool , and also that it was constructed on some large flat slabs: whether these slabs are part of the foundation of the wall, or are in fact an earlier floor is not yet clear. Quite a long discussion with Peter has led to a decision to dig a bit more and see what happens.

At the south end of the corridor Darren completed his lovely plan and began the exciting job of numbering everything. Once this is completed we should be ready to continue. During the course of the day it suddenly dawned on me that, while there is a very obvious drain from the eastern plunge pool in this area, there is no similar drain from what I presumed was the western plunge pool. It seems that there was only one plunge pool after all, and that the space opposite with the remnants of a stone bench was actually a changing space, presumably for a private bathing area."
Posted by David Petts at 11:55