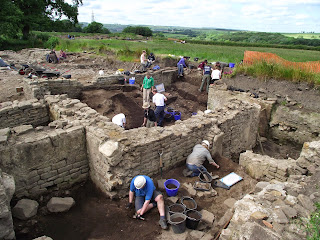 Apologies for the lack of a blog entry on Friday – circumstances conspired against me. Today has been about walls – new back walls, newly revealed walls where we weren’t expecting them and new fort walls.

In Trench 1 we’ve been working away at a series of locations on the northern and eastern rampart. In the north-west corner of our trench, we extended a slot northwards to try and pick up the fort wall. We had a rough idea of its alignment as we have already seen it forming the back wall of the latrine block. Pleasingly, in our new slot it was where we expected – we also picked up the back wall of what we had suggested was a tower. It in fact looks more like a stone structure surrounding an oven on three sides. In the corner of the trench, the students have done a stirling job pulling back the section edge and revealing the inner face of the robbed out wall. It now looks like they may have picked up the southern wall of the corner turret. We will need to make one more tiny bite extending the trench to pick up where this return wall runs back into the main wall alignment. Finally, southwards along the eastern rampart, we ran another prospecting slot out from the main trench to pick up the fort wall on this edge. Surprisingly, the extent of open space/rampart between the intra-vallum road and the wall is much more substantial than on the north side, with nearly 3 metres of blank space on the berm. Put together, our cheeky trench extensions mean we have now picked up the wall on both our ramparts as well as where it meets the fort corner turret.

Elsewhere the focus in Trench 1 has been on picking apart the floor surfaces in the barrack interior. We’re starting to find a range of metalled surfaces at various places within the barrack. We have also identified a number of possible cut features – post holes, gullies etc. Some of turned out to be convincing on full excavation, others less so… Nice finds include a small penannular brooch (possibly Type D – although I’ll need to check my brooch typologies….) found by Tudor in the stable area of the northern compartment.

In Trench 2, inevitably there has been much work on the bath-house interior. In the main room, the students have done stirling work taking the section back and clearing up the new northern wall of the room, which had previously been glimpsed when the altars came out. Although they have not revealed all of it, we have seen enough to know it contains a blocked doorway. On the other side of the main room, there has been continued work removing the big dark refuse deposit. Pleasingly, we are now coming down in places onto the benches that ran round the interior of this room. Progress has slowed slightly though as we’ve hit a more clayey layer which will need to be treated as a separate context. In the smaller room, we’ve decided to put a slot through the refuse deposits running from the southern end of the square annexe to the doorway. This will allow us to work quickly through the deposits without getting caught up too much with removing stone surfaces which mainly lie on the other side of the space. We’ve also made an executive decision to pull the trench out slightly to the east to just allow us (we hope) to catch the eastern end of the southern annexe, which is currently just beyond our trench edge.

Outside the bath-house life is getting more exciting. Abbey and Nicole have taken out a baulk we’d been keeping in to allow access in and out the trench and we’ve rerouted our barrow runs. This means we now have a clear view of all the exterior of the bath-house. To the west of this , in the area where we’ve been exploring the possibility of a new strip building we have indeed found a new wall. However, if this is part of a strip building it would make it much longer than our others and continues beneath the northern edge of the trench – nor is there, as yet any sign of another paired wall which we’d expect to find. I just wonder whether it might in fact be defining an exercise yard area adjacent to the bath building. Finally, we are revisiting one of our certain strip buildings. Here it is clear that the kiln or oven is much larger than we appreciated (or we have two phased ovens). The new area is less well preserved than the main oven we uncovered in earlier seasons.
Tomorrow, more bath-house clearing and wall cleaning…and just possibly a little laser scanning! 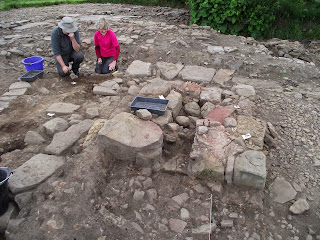 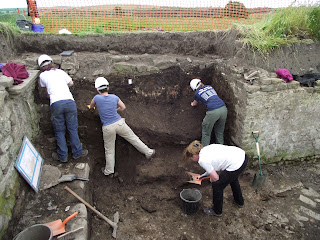 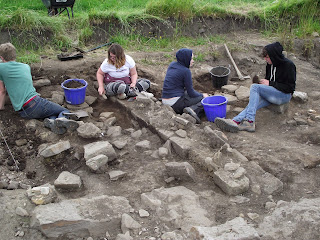 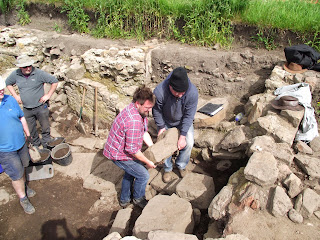