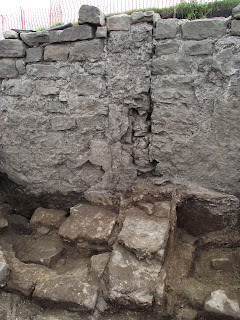 Sorry for a lack of blog yesterday, I was up in Edinburgh talking about early medieval monasteries!

Even after being away for only a day, it is amazing how change there has been on site. Trench 1 is now a maze of strings as we begin drawing the elevations of the barrack walls. Until this point, most of the drawing on site has been planning – plotting out the horizontal spread of the various features and surfaces we have been uncovering. With the move to drawing the wall elevations, we’ve shifted to capturing the all important vertical details of our barrack structure.

However, today I want to focus in a bit more detail on Trench 2, because the last two days on site has shown that no matter how well you think you understand what is happening, you can always be surprised. As I left site on Monday, I thought I had a good, clear understanding of the archaeology of the main room in the bath-house. Although, it was clear that there had been some internal alterations (the blocking of a northern door by the stone benches was a clear indicator of this), I was assuming that the basic contours of the room had been pretty consistent throughout its life. However, with the removal of the last fragments of the internal fill (apart from our baulk), the team uncovered a stump of walling that seemingly originally crossed the room (west-east). Very significantly, both sides of these walls were faced with the same kind of opus signinum that we’d previously found in patched in the room. I’d previously been flummoxed by this, as op sig is usually used as a flooring rather than on walls (where we’d found it). With our new fragment of walling it suddenly became clear; what we had was the remains of an interior, op sig lined “tank” – in fact, we seem to have indicators that the new dividing wall separated two of these ‘tanks’. Now what could these tanks be? Not surprisingly, as we think this is a bath-house, the most obvious answer is that these are small baths – the clear parallel is with the pair of cold plunge pools in the commandant’s house. Until now, our interpretation of this structure as part of a bath-house was based on circumstantial evidence. It looks like we finally have solid direct evidence that parts of this building were elements of a bath-suite. The other clear thing this tells us, is that at some point, the baths must have been pretty seriously re-arranged, with the plunge pools being converted into a changing room. By looking at the various evidence from the vertical faces of the wall, we can hazard some broad phasing. We seem to have an initial stone structure with two plunge pools in the southern half of the room. We can’t be clear about the relationship between these plunge pools and the northern half of the room, as our putative northern edge of the northern plunge pool remains beneath our baulk. These plunge pools were lined with typical Roman opus signinum. It is probably that the northern half of this room was decorated with painted wall plaster- we’ve already mentioned the fragments visible in the north-west corner still in situ, and today we could see further preserved plaster disappearing behind the back of the stone bench. At some point, the plunge pools went out of use and the stumps of the dividing walls were incorporated into the new stone benches that surround the edge of the room. This stage also saw the blocking of the door in the northern wall, as the bench clearly runs across it. Probably associated with this stage was a new layer of white plaster that clearly covers the painted wall plaster and the blocked doorway, but does not run down the back of the benches. Finally, probably at a later date, the window in the south wall was smashed through and the new jerry- built annexe/ porch was built on the southern edge of the room. It is quite possible that the adjacent window opening was blocked up at around the same time. It is quite possible that we will be able to further refine this sequence as we get a better understanding of the relationship of the various phases of wall plaster, the blocked doorways and other architectural features.

It is not only this room, that we have had our interpretations transformed this week. I mentioned previously that we’d extended our trench slightly, with the aim of catching the full extent of the alcove, which we believed was paired with the arched alcove on the western side of the southern end of the our north-south corridor. In the last day’s we’ve found a nice floor to this alcove, which clearly marked it off as a distinct area. However, when we pulled our trench edge back, we didn’t find that the symmetrical plan we were expecting. Instead, rather than having a small north-south wall marking the back of our eastern ‘niche’, the walls instead continue. Currently, it looks like this may in fact be just the western end of a corridor that was added across the front of the building. Again, our expectations were confounded and we have add to alter our understandings of the structure. But that is the fun element of excavation! If we knew what was there, we wouldn’t need to dig it! 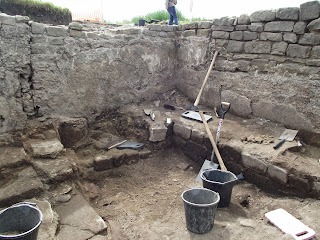 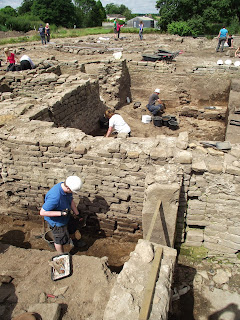 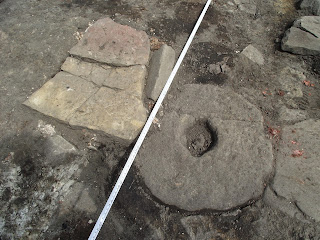 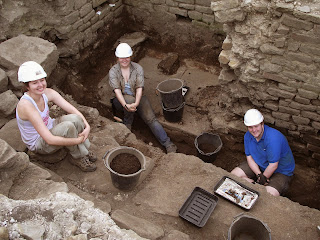 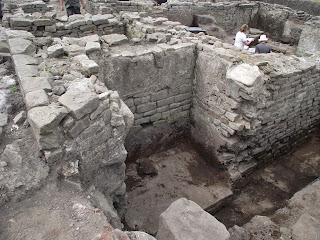 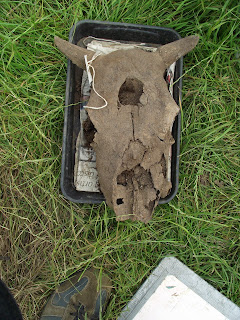 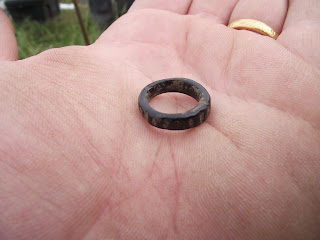