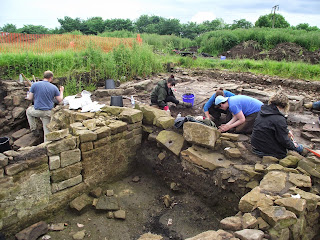 In Trench 1, our groups were attacking various areas around the edge of the trench. We’ve expanded our trench in two places in an attempt to catch the outer wall of the fort, particularly on the east side. So far, we’ve mainly been moving turf and topsoil, but we are keeping our fingers crossed that the walls come through soon. Elsewhere, on the north side of the trench, we’ve got a group of students cutting back a small surviving area of overburden to get a better understanding of the interior side of the rampart in this area. No significant results so far, but plenty of finds including Roman glass, pottery and animal bone is being revealed. Finally, on the western side of the main barrack building, a group is cutting back the layers and is coming down onto a patch of stones, possibly a crude wall or stone surface. Again, we’ve had some nice finds here including a copper alloy stud. More generally, Peter, Matt and myself have been having a good look at the barrack block – we are tentatively wondering whether we can see another similar discrete compartment, similar to the decurions quarters. Have we got ‘chalets’? Difficult to say at this stage, and much will depend on improving our understanding of the phasing.

In Trench 2 we’ve been throwing people at the main bath-house. This week we are without our usual trench supervisor Jamie, as he is on paternity leave dealing with his new ‘small find’. However, Natalie, Bekka and Tudor are doing a great job. Inside the large room, we’ve got a number of students clearing up the mess left by the removal of the altars at the end of last year. This involves bucketing away the collapsed deposits left by the digger- its frustrating clearing an area that has previously been cleared, but we are making great progress. At the other end of the same room, we’ve been cutting back the dark fill and, inevitably, hit another layer of stones, although we have also revealed some nice wall plaster and op sig. In the small annexe structure adjacent to the external door for the changing room, the excavators have found an area of flooring across half the area and it is possible we may also have some steps leading from roughly street level into the room. This is the first information we’ve been able to gather about how our basement rooms related to the higher street level. In the adjacent corridor we’re also slowly moving the interior fill- lots of stone and lots of bone! To the south of the bath-house, the students are clearing the interior of the post-pad buildings – it looks like they are coming down onto a nice clay surface that may make up much of the interior flooring of the structure. Finally, to the west, a small crew are dismantling a large stone spread, which includes a section of a worked plinth or panel.

We got away lightly with the weather today – some heavy rain over lunch, but it cleared up fairly quickly and we stayed on site for the rest of the day. 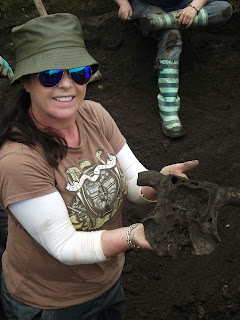 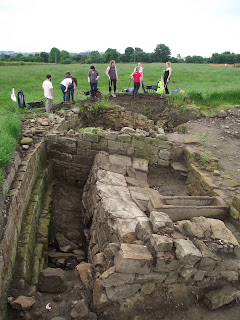