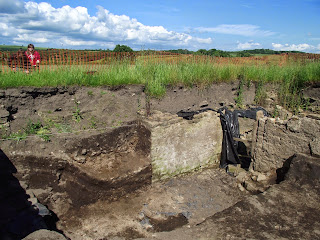 Good day on site today – the numbers of people out at the moment really make a difference when it comes to the amount of work that gets done.
In Trench 1, the ‘grunt’ work in extending the trench slightly in places is paying off. In the corner turret area the wall is starting to come out quite nicely, although the internal facing stones seems to be robbed out. We opened up a new extension today in the north-east corner of the trench to try and better understand the small stump of wall that has sat there for five seasons now. We’ve always assumed this was part of a small turret, but we need to clarify this. In the course of this, Megan found a nice circular copper alloy brooch with traces of red enamelling still visible. On the eastern rampart, a series of what we thought might be post-holes disappeared into nothingness although the rampart itself is clearly visible. In the barrack itself, we are taking out the final elements of the later phases and starting to get a better understanding of the building interior. We need to make some big decisions about what elements of the building we want to dismantle before we can go much further. To the west of the barrack, the nice cobbled surface has come through very nicely whilst to the east, the volunteers are making great strides in taking down the road section they are looking at.

In Trench 2, the interior fill of the main bath-house room is slowly but surely receding. The collapse from the altar removal has now all gone and they students are starting to move sideways into the section to catch the back wall that was partially exposed when the altars were removed. In the process of this work they came across a really nice cache of butchered cattle bone. Elsewhere in his room, a possible clay layer is emerging from within the dark fill. It is difficult to tell whether this is going to be a coherent deposit or simply a clay lens within the larger dump. The fill between the main room and the annexe has also now gone leaving just a small dump of stones partially blocking the threshold. In the corridor, the students have finished cleaning back the complex of secondary stone structures, clearly showing a paved path leading towards the doorway in the cross-wall. It looks like these flags have been laid down on top of an initial deposit of refuse to facilitate movement towards the door where seemingly more rubbish was dumped.

The stones from the larger post-pad building are now more or less completely removed, leaving just a small number overlying the north wall of the earlier structure. We got a nice assemblage of what looks like Crambeck parchment ware from this area.


Finally, we’ve been having a good look at the ‘empty’ area to the west of the bath-house - we are starting to think that there may actually be another strip building here, although a poorly preserved one. This would mean the side road between the previous strip building and the bath-house is smaller, but I think, more convincing. 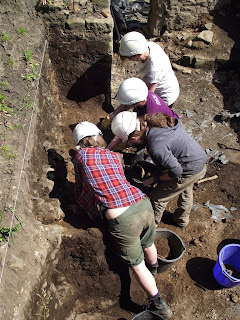 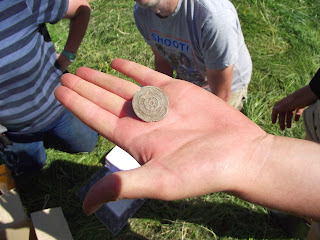 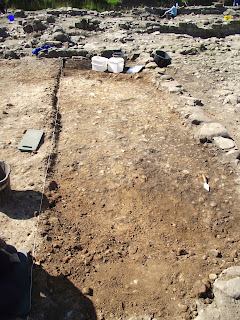 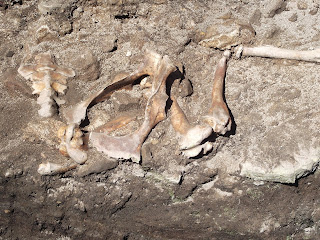 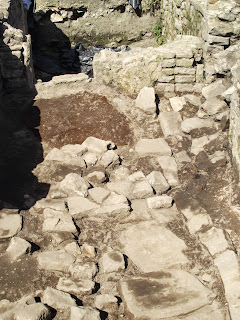