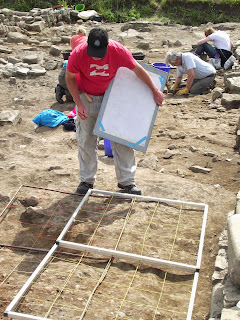 Another good day. My overwhelming impression this year is the sheer quantity of earth being shifted (in a careful and orderly manner of course!). In Trench 2, once the Leicester team had completed the photogrammetry in the bath-house, we were able to get back in and continue to move the black stuff. The bench is now quite clear in the south-east corner and parts of the south side, although it appears to go awol somewhere round the south-west corner near the entrance. Just at the end of the day we also made first contact on this side of the building with the flagstone floor, which is very encouraging. We just need to start thinking about the practical logistical issues of moving our spoil out of an increasingly deep feature! The slot in the corridor is also moving well with only perhaps 50cm to go until we reach the floor level.

Outside the bath-house there is still lots of planning going on – slow but important. There is less work going on in the strip buildings today as we’ve moved most people back into the bath-house. However, there is still some work to do in cleaning the floor surfaces back. Sue is also doing stirling work in tackling the big black splodge in the interior of our putative third strip building (if that is what it turns out to be).

Meanwhile in Trench 2, lots of activity in the barrack- tomorrow we have a team from the university coming out take samples from our various hearths for scientific dating- this will allow us to remove these remaining burnt features and really crack on with sorting the interior. To the west of the barracks, the biggest event was the caused by some slightly over enthusiastic mattocking. We’ve now revealed the bottom course of the barrack wall – but crucially picked up the odd piece of walling that was lurking unloved just west of the north-east corner of the barrack. This can be seen diving down (probably caused by slumping) before turning west towards another odd floating piece of wall- the key question is can we pick up a stratigraphic relationship between this and the barrack – at the moment it looks like it is slightly overlain by the barrack west wall, but there is still along way to go in cleaning this area up

Some nice finds today – including an unusual loaded/weighted Roman dice- attached is a poor image from my mobile phone – I’ll get a better one tomorrow. Anyone know anything about Roman dice? 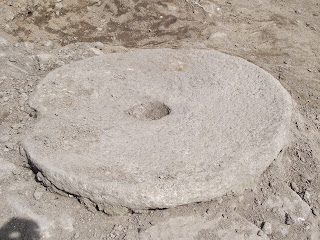 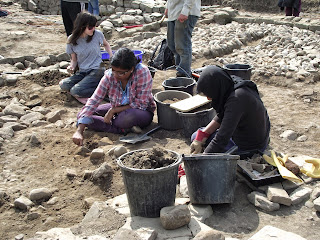