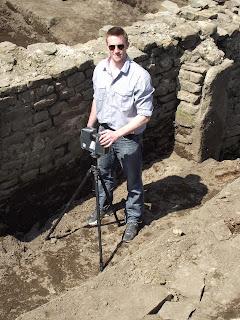 Warmest day on site so far this season, although thirsts were assuaged by a mid-afternoon delivery of Rocket lollies (popsicles for our US chums). Today the main excitement was in Trench 2, where were visited by Steffan and Jonathan from the Digital Building Heritage Group at De Montfort University, who were hear to carry out some detailed laser scanning of the bath-house. This meant we had to move everyone out of the building whilst they spent the day using their scanner to carry out detailed survey of the interior and exterior of the structure. This will allow us to reconstruct a virtual version of the bath-house at a later date. This has two uses – first, it will be a great way of communicating the excitement of the excavation to the general public, but secondly, it will also act as a really useful record of the physical remains of the structure in 3D. We’ll keep our readers updated with progress on this front. Tomorrow they are returning for some more traditional photogrammetry on the building – which is also useful for 3D modelling. You can read more about the initial stages of this project on the DBHG blog

Because we had to move everyone from the bath-house to avoid being zapped, we instead got lots of work done on the strip buildings which we are currently revisiting. In the western strip building, new flagstone floors started to appear in the interior, whilst in its smaller partner, we instead have started to pick up a clear phase of clay flooring.

In Trench 1, work was similar to yesterday – lots of work on the barrack interior, with metalled surfaces and clay patches appearing. There was also continued great progress on the corner tower. Our slot in the eastern rampart is still a little confusing. What we thought was the dark fill of a ditch has turned out to be running under the deposit we thought it was dug into, and now appears more like a small earth bank. 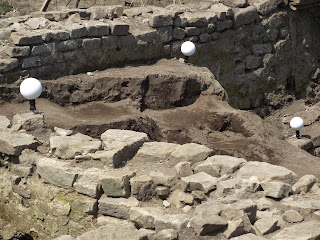 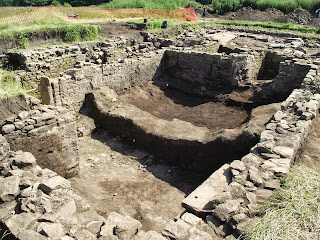 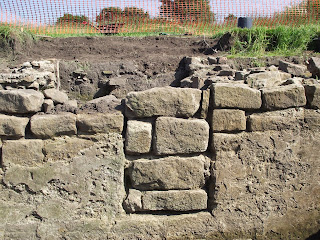