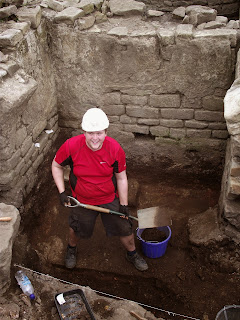 Beginning of a new week and lots of people on site! This has allowed us to forge forwards. In the main room in the bath-house, we have started to remove the area of fill that had been our main way in / out of the trench, so we've had to revive the use of the old Roman doorway to allow us to shift the spoil. In this area we have now more or less revealed the interior bench around most the entire perimeter of the room, although in places it is pretty badly knocked around. Interestingly, it runs across the blocked doorway in the north wall, giving a nice example of the kind of phasing information we should be able to work out by analysing the standing structure of the bath-house. This doorway is also partially covered by white plaster - and similar white plaster overlies some of the painted wall plaster in the north-west corner.

In the corridor area, there has been great progress with our slot through the deposits - crucially, in places we have started to hit the floor level. It is clearest in the western alcove at the southern end - here, Danny has done great work in exposing the stone flagstone floor. In the later building to the south of the bath-house, we have begun to take up the floor slabs and have exposed a further clay surface beneath it. To the west of the bath-house, it is becoming clear that the new wall does not mark the western wall of a new strip building. Although there is a wall running parallel to it, it is of completely different constructional type. The main new wall is mortar-bonded, whereas the parallel wall is simply a rough row of boulders, probably post-pads, similar to those that defined the walls of the latest phase of the post-pad building to the south of the bath-house.

In Trench 1, there is lots of planning going on, although work on the barrack interior continues apace. On Friday, we found the probably remains of baby buried up against the wall foundations. In the turret, the students continue to make fantastic progress on revealing the corner tower. We can now clearly see that the tower walls just butt up against the interior face of the main fort wall and are not bonded into it. Further down our trench edge, our slot through the eastern rampart is continues to expose a difficult to understand feature- is it a ditch or do the layers in fact extend under the sandy layers either side of it? 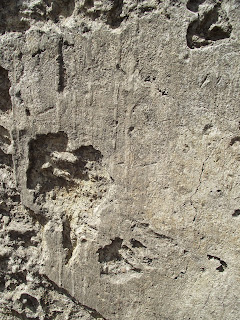 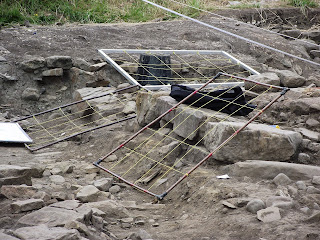