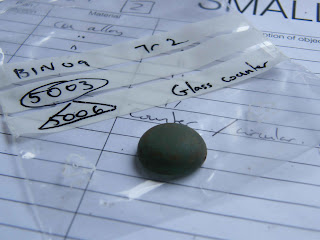 A bit wetter today, which actually helped with the cleaning. The students did a stirling job working through the County Durham drizzle. In Trench A there was more cleaning back of the northern side of the area. Although there is still more to take off, real progress is being made. The clay floor of the probable turret is looking really nice- a rare opportunity to actually have the floor level of a feature like this. As we reach the northern edge of the trench we now also appear to be reaching a stoney strip which is presumably part of the rampart and wall.

In Trench B, we completed the first complete clean and got ready for some photographs. Small finds include a nice jet(?) bead, a glass gaming counter and a trumpet brooch, as well as several coins. It appears as if we have two zones of building: some probable post-pads and some relatively light walls which seem to intrude into the road surface (which is probably medieval/post-medieval in date), whilst further north there appear to be a number of features, including one structure and a probable oven which may comprise the Roman street frontage. Of course, this may all turn out to be incorrect, time will tell.
Posted by David Petts at 13:27