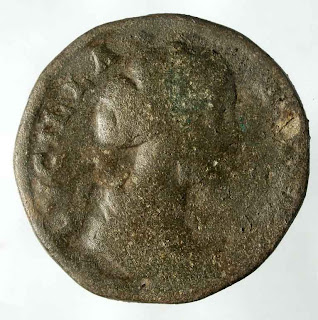 Well, we've got to the end of the first week. The weather was far kinder today, even a bit of proper sun in the afternoon. In Trench A, we've ceased cleaning and are now focussing on excavating features. We're tackling some of the gullies and other features that cut into the intra-vallum roadway in an attempt to clarify their sequence. Meanwhile, we're also looking at the area to the west of the main barrack, we never really addressed properly last year. After a good titivate over the last couple of days we'll be ready to plan it next week. In the corner curret we also think we've identified the trench dug by Kenneth Steer in the 1930s and we've begun to re-excavate it. This will allow us to see some interesting stratigraphy in section. In Trench B we have made the decision not to take the entire area down at the same level; instead we are focussing on a number of sub-areas within it. This is partly to enable us to get a sense of stratigraphy as we crack on into the key features quickly and avoids having to spend excessive amounts of time cleaning. It will also give the students a chance to experience all aspects of excavation in their three weeks with us. The relationship of some of the structures to the roadway is becoming clearer now. It is clear that the Roman street frontage is further towards Dere Street than I thought earlier on in the week, and in places the later layers of the road run over the top of the Roman walls. We've got at least one nicely preserved stone walled strip building runnning back from Dere Street with evidence for a hearth inside it and another possible hearth or industrial oven next to it. Excitingly, we recovered a blob of molten white glass from this structure today- are we going to find evidence for Roman glass working?
Posted by David Petts at 11:56