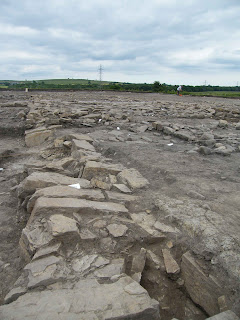 Today was the end of the Durham first year's time on site. We mainly spent the day getting all the loose ends wrapped up. Next week we are having a quiet week- there will be no work on site, although we are being visited by Mick Aston (of Time Team fame, as well as being well-regarded academic in his own right) - he is being awarded an Honorary Degree by Durham University next week. The key job now is to get every thing ready for the arrival of lots of new excavators in the week beginning July 5th- we have around 40 from Stanford and 20 from Texas Tech, as well as 20 members of the local community, so there will be no shortage of hands. This means we can get on with a couple of major jobs, particularly the initial clean of the rest of Trench B and removing the final areas of topsoil in Trench A. Having completed the latest stage of planning we will also be ready to really get stuck into some of the key areas in both trenches...just hope the weather holds.
Posted by David Petts at 13:11