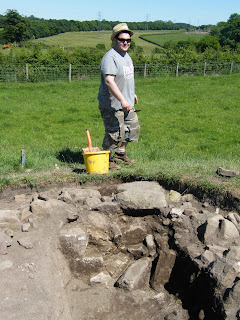 Another hot day on site; wilting spirits were improved by shameless bribery with some of Asda's finest cheap ice lollies... More slow work planning and recording. The removal of the balk in Trench A has been completed with (surprise surprise) more rubble surfaces revealed. In this Trench the most exciting progress has been in the re-excavation of the previous trench in the corner turret, with the first hints of surviving coursed masonry beginning to appear (see picture). More drawing and recording in Trench B, although some more cleaning and excavation has been going on. In an area to the west of the patch of large flagstones, the edge of another stone appears to have been tipped up and is clearly disappearing under the later road surface (don't forget these high layers of Dere Street are probably post-medieval in date - the Roman levels of the road are probably a good metre below our current level).
Posted by David Petts at 15:12