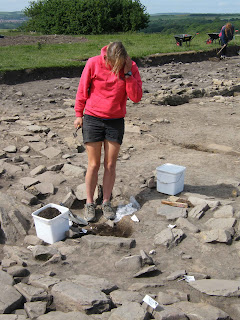 Well, it’s the end of week two and things are really progressing on site, helped by a spell of really good weather. In Trench A within the fort, we’re starting to get a much more detailed understanding of the sheer complexity of the late activity on the barrack block. We’re starting to show the variations in the basic build of the wall in more places than we had last year, and its looks increasingly, as we expected, that we are very much looking at the last phase of a complex and long-lived building. It appears that the flag-stone floor is one of the very latest stages of activity within the building; it doesn’t seem to have been part of the main late Roman occupation layer. We are also starting to look at the features cut into the floor of the compartment at the north end of the building – we’ve already found that the stone-lined channel gets significantly deeper as it heads east and appears to be overlain by an area of later paving.

In Trench B I think the main story of the last fortnight, and perhaps the most important conclusion so far, is that activity in the vicus goes on well into the later 4th century. It is generally assumed that vici fell out of use in the late 3rd century or early 4th century. However, here at Binchester, we are getting plenty of good evidence, particularly coinage and plenty of late pottery (such as Crambeck Ware and calcite-gritted ware) that the vicus was still in use well into the mid/late 4th century. The big question of course is, how late did it go? Into the 5th century?
Posted by David Petts at 12:33