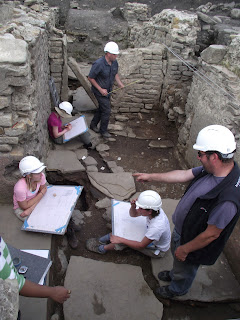 A beautiful day on site today - again, we had lots of visitors, including appearance by Durham's own Professor Jenny Price. Earlier in the day she had taken a look at the glass we had discovered this season and noted we had fragments from several bath flasks, used for holding the oil used in the bathing process.

In Trench 1, we continued to define the large spread of burnt clay and sandstone in the southern end of the trench, although we are no closer to understanding its actual purpose. Across the rest of the trench most of the focus was on excavating the spreads of burnt material belongin, we assume, to the pre-barrack phase of activity. Several of these areas have produced quantities of crucible fragments, and industrial residue. Not all these spreads are associated with actual scorching of the underlying layers so may well be dumps of debris from elsewhere.

In Trench 2, we are continuing with drawing the elevations in the bath-house although we will supplement these with photogrammetric photography once the main excavation is over thanks to Aerial-Cam. In the area to the west of the bath, we've done some recording and also clearly have a well-defined curved edge of set stones, although it is not as clear precisely what they are actually defining. In the bronze working area we spent much of the day giving it a thorough clean to get some photographs taken. This revealed a series of further stake holes defining an internal area within the larger building- these can be seen on the vertical shot below.
On the main road front, the big slot continues to go down seemingly onto yet another cobble surface. In the area in between, the dark street front soils continue to be removed- with a finds assemblage dominated by massive quantities of cattle bone.We've also had some more drone photography- the image at below shows  our metalworking area in Trench 2. 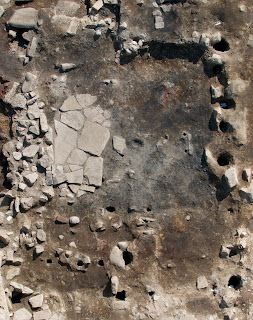 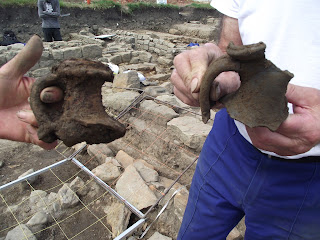 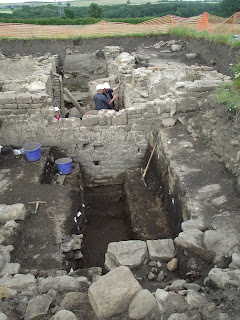 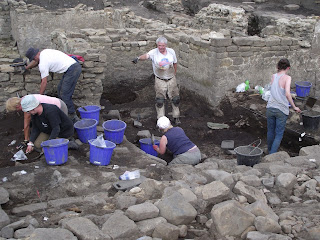