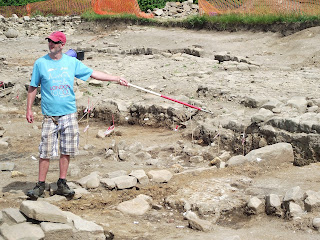 Today was the last day of week 5 and everyone was busy in both trenches, although we found time for Matt and Jamie to give us trench tours to bring everyone up to speed with the progress we've made over the last couple of weeks.

In Trench 2, there has been lots of umming and ahhing over the road surfaces. We are still not entirely clear whether we have reached natural or not in the road section, and despite the hopes of Matt and the valiant efforts of Alastair the burnt area we thought might be an oven has remained rather stubbornly just a large burnt area - we may have to expand the slot. Across the rest of the trench, ranges of internal features are still appearing, but I suspect that it's not until we've got them all planned and properly phased that it will be really possible to draw out the possible groups of features and identify whether they mark anything structural.

In Trench 2, the main development was inevitably the increasingly complex state of the bath corridor (although I'm not sure we can really call it a 'corridor' anymore). Poking around to the north of the footings of the new cross wall revealed that the box flue tiles ran across the northern side of this wall. I also took a good look at the  upstanding walls adjacent to the cross-wall founds- it is just about possible to see where the wall once ran, but following its demolition it had been cleaned up pretty thoroughly. One key question remains- where was the furnace? Presumably somewhere to the north. Related to this uncertainty is how the hot air reached the section of the hypocaust to the south of the cross-wall- I'm guessing at this stage that there may be an arch underneath the wall head, similar to those visible in the praetorium bath house. 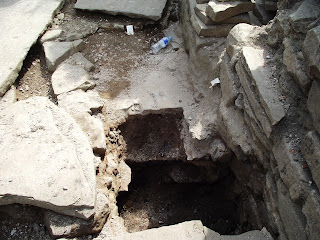