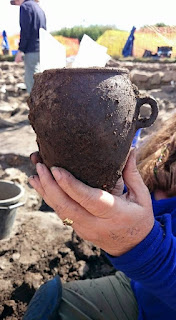 An emotional day as we completed our seven-year project at Binchester- after a total of nearly an entire year's excavation, hundreds of Durham students and volunteers, and amazing archaeology, we have had to come to a halt to allow us to analyse and understand the nationally important remains we have discovered.

Despite this, we kept working right up to the wire. In Trench 1, we took the opportunity to excavate a number of sondages across the site just to give us a glimpse of earlier levels. In general we have tried to avoid these kind of small-scale interventions in favour of open-area stratigraphic excavation, but given the fact that we were completing the project they do allow us to at least to get some sense of the underlying stratigraphy. One of the sondages, started earlier this week, went through an area of slumping in the southern end of the barrack and ended up revealing a possible well. Today, we cored it to find out how far it went down - it turned out that it was at least 3m deep (measured from the surface of the excavation) - there were hints of wood revealed in the core. In another sondage nearby, we revealed further damp deposits, which again included fragments of wood, possibly indicating a wooden lining to the intersecting gully.

We also carried out a rapid investigation of areas of the alley to the west of the barrack, just checking areas which had not been explored in detail- inevitably this through up new stretches of wall! We appeared to have the gable end of the narrow stone building which lay perpendicular to the barrack- this parallels the odd building at the northern end of this alley. It is extremely hard to get a sense of the chronology of these structure- do they indicate a replanning of the fort at some point. It is frustrating that we will not get  a chance to examine these in more detail.

In Trench 2, there was plenty of planning and recording- but again, there were new discoveries and developments. Most intriguing was a clear stretch of new wall that ran north-south from the road front underneath the metal working area. It was joined the west-east wall that runs along the road front itself, but it is not clear how/if it relates to the Roman bath-house structure- one possible hypothesis is that this defines an area at one time used as an exercise yard, although it is hard to be certain. Elsewhere, last minutes delving in the large strip building that partially overlies the bath compound wall unexpectedly revealed that underneath the substantial but crude post-pad wall lines were the remains of a well-built wall. I'd always assumed that the entire building was a very late addition- but it now seems that it may have just been a late rebuild of an earlier, underlying structure.

As we came to the end of the day, with about five minutes before packing up  Laura revealed the intact rim of a pot embedded within the fill of the metal working area. Following rapid excavation this turned out to be a completely intact pottery vessel complete with its handle still in place- a wonderfully fitting end to our time at Binchester....

Although this was the last day of the excavation, this won't be our last blog post- over the next week I'll be posting acknowledgements and thanks to all who helped with the project, as well as a more detailed explanation of why we have stopped. I'll also try and post a wider overview of what we've found in our trenches over the course of the excavation and some thoughts about what our big questions are for the post-excavation process. But for the now...vale! 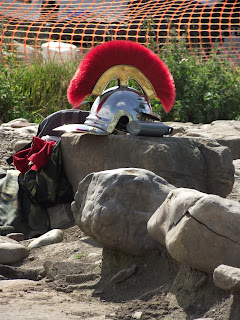 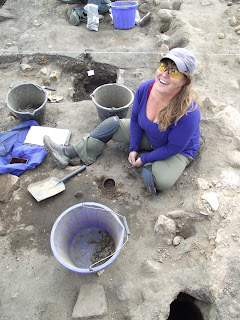