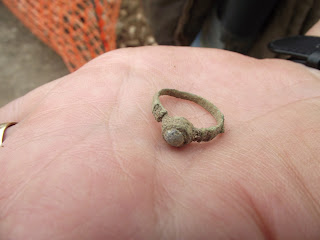 Another hot and sticky day on site, but everyone persevered with their work.

In Trench 1, there were lots of interesting developments. Perhaps the best way to sum these up is with the one word "Burning". In the southern end of the barrack, our large burnt area of stone which underlies the western wall of the barrack just gets bigger and clearly represents a significant conflagration. Also in the southern end of the barrack, a new area of possible metal working / smithing is emerging; it is not clear how this stratigraphically relates to the barrack, although it is clearly early. It may well even represent evidence for pre-barrack activity.

In the northern compartment of the barrack, our area of new flagstone flooring has emerged and been consolidated. Our nice worked stone drain clearly sits above it with a soil layer in between. We've not removed the stone drain as we want to keep it in situ for possible future consolidation and display. The flagstones clearly run under the drain, but have yet to emerge on the southern side. This may be because we are not down at the correct level in this area- although another large patch of burning with some evidence for debris assocaited with metal working has been emerging from here. It may represent in situ smithing or a dump of debris from elsewhere. Finally, towards the end of the day, we uncovered the remains of a small clay oven up against the edge of the eastern wall of the compartment. This would have been a small domed 'tandoori' style oven, although the upper elements have now gone.

We've also continued poking around in the slot through the eastern stretch of intra-vallum road. This has revealed a large patch of burning and clay up against the rampart. It may be part of a large early oven subsequently covered over by later rampart and road layers. This also seems to represent possible pre-barrack activity and may be linked to the earliest phase of fort.

In Trench 2, the main developments were in the bath-house. Excavation to the north of the newly discovered cross-wall foundations in the corridor have revealed some more evidence  that the walls were formerly lined with box-flue tile, which was largely stripped out but remains in situ at floor level. It seems likely that the many iron clamps/fittings we have found embedded in the wall of this area were used for securing the flue to the stone wall.

To the north of the cross-wall, Sue has continued to explore the early floor layers. This revealed a void in the floor next to the west wall of the corridor. Our ever curious trench supervisor Jamie had the bright (and brave) idea of sticking his phone down the hole to take a photo - and revealed evidence for a hypocaust pila of stacked ceramic tiles. We now seem to have two hypocausts, one each side of the corridor cross wall.

Lots of nice finds- including a really nice ring from one of our metal detectorists. It is worth mentioning how helpful the detectorists have been. Although we always try to retain all the finds in situ, inevitably some get missed. By having a regime of detecting our spoil heaps we are able to recover items we may have initially missed. They have found some of our nicest finds - including last year's Christian ring. Without them our recovery rate would be much lower. 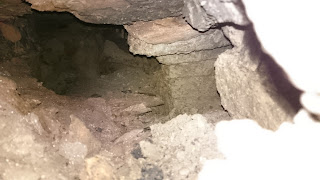 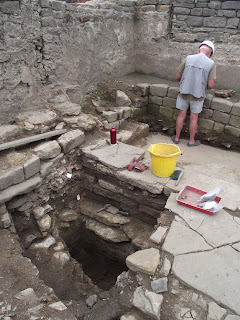 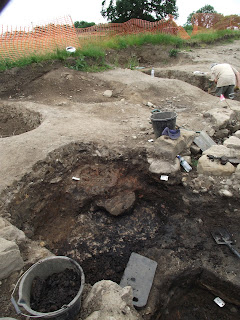 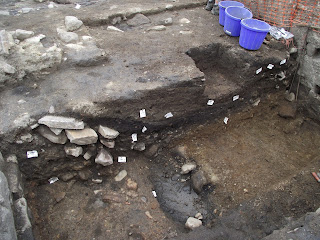 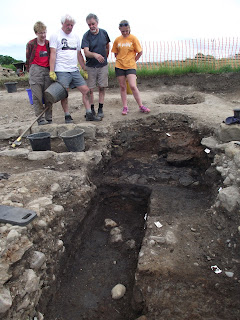 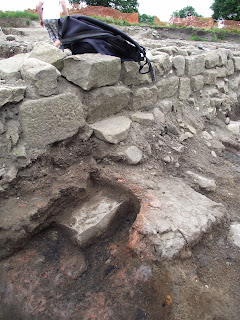