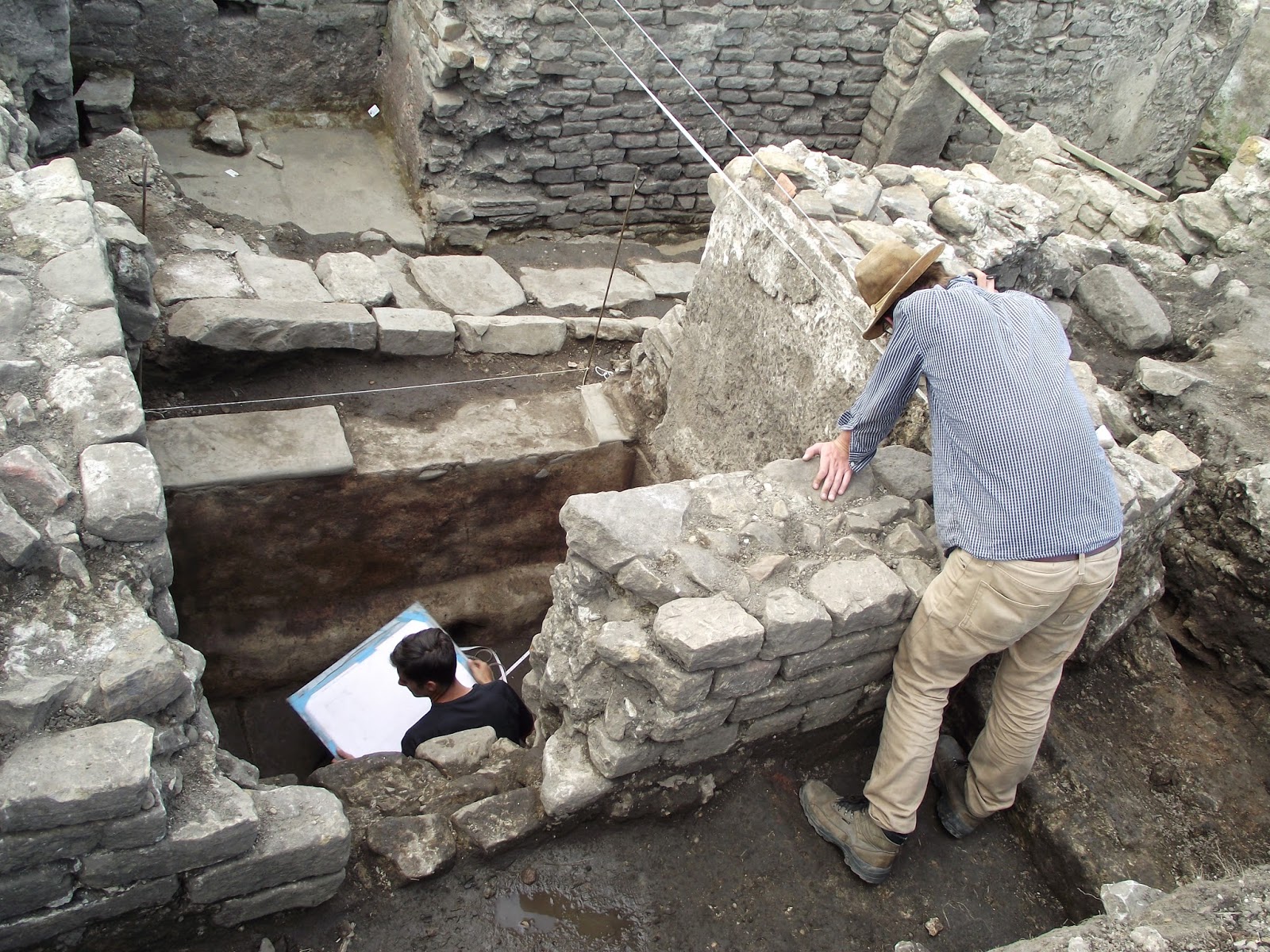 Sorry we’re running slightly late with our blog- hectic day or two, but as we move into our last week on site, I’ll try and catch up with myself.

Friday was a busy day with lots of visitors, including from our advisory group. They helped us interpret the remains we have on site, think about how to move the project on, and, with only one season remaining, ponder the future for Binchester.

Taking them around Trench 1 really brought home to me how much we’ve pushed out understanding of the barrack building forward this year. Whilst Trench 2 may have better preservation, the sequence of structures in Trench 1 offers us far more complex and intriguing facing. Our sequence of large drains are still most likely to be stable drains, although it is apparent that some seem to drain through the external wall, others do not. Most importantly, over the last couple of days we’ve really started to identify a whole series of stone lined post holes within the main barrack structure. These still need fuller excavation and planning, but they make best sense as a series of internal divisions and walls within the earlier structure. It is not clear whether some of them mark the internal dividing line between the stables and the rooms in our early phase barrack, or whether the later eastern wall had this function. It is clear that the build of this latter wall really varied in constructional technique along its length- in one place, it is possible that there was simply a rough trench possible supporting timber uprights or acting as a crude beam slot supporting a wooden wall. It appears, once again, the phasing is even more complicated that initially thought, and that the simple two-phase story of “wide barrack” followed by “narrow barrack” will not suffice.

In Trench 2 , there is lots of planning, but there have been two major developments, one inside the bath-house and one outside. The internal development has been the completion of excavating the eastern arm of the annexe to the corridor. Surprisingly, the removal of the final section of fill has revealed an exceptionally well preserved small plunge bath, with its internal lining of opus signinum remaining more or less intact. There is also some really interesting evidence for the plumbing- including a drain in the base which seems to line up with some of the culverts we’ve picked out in the nearby floor, as well as some gaps within the wall, which may well have originally contained lead piping or some other mechanism for the chanelling the water into this wonderful little feature. Outside the building, Morris has finished excavation of the pit up against the boundary wall. This has revealed around eight courses of stonework as well as foundation stones. The base of the wall is only 20cm higher than the floor of the bath-house. This has some quite profound implications for the rest of the site. I’d always assumed our bath structure survived so well because it was partially terraced into the hillside. It is now becoming clear that the walls were originally standing and that the surrounding street surface and associated yards must have risen five or six foot over time to embed the building in stratigraphy.  This is both exciting and challenging. How do we deal with this depth of archaeology with only one season left!

Various nice finds have popped up over the last couple of days – including some splendid painted plaster found by Michael who is excavating part of the new room to the east of the corridor, where there is also excellent preservation of in situ painted wall plaster, although there is still much to be exposed. My favourite find though is part of a haunting ceramic face from a late Roman head pot. 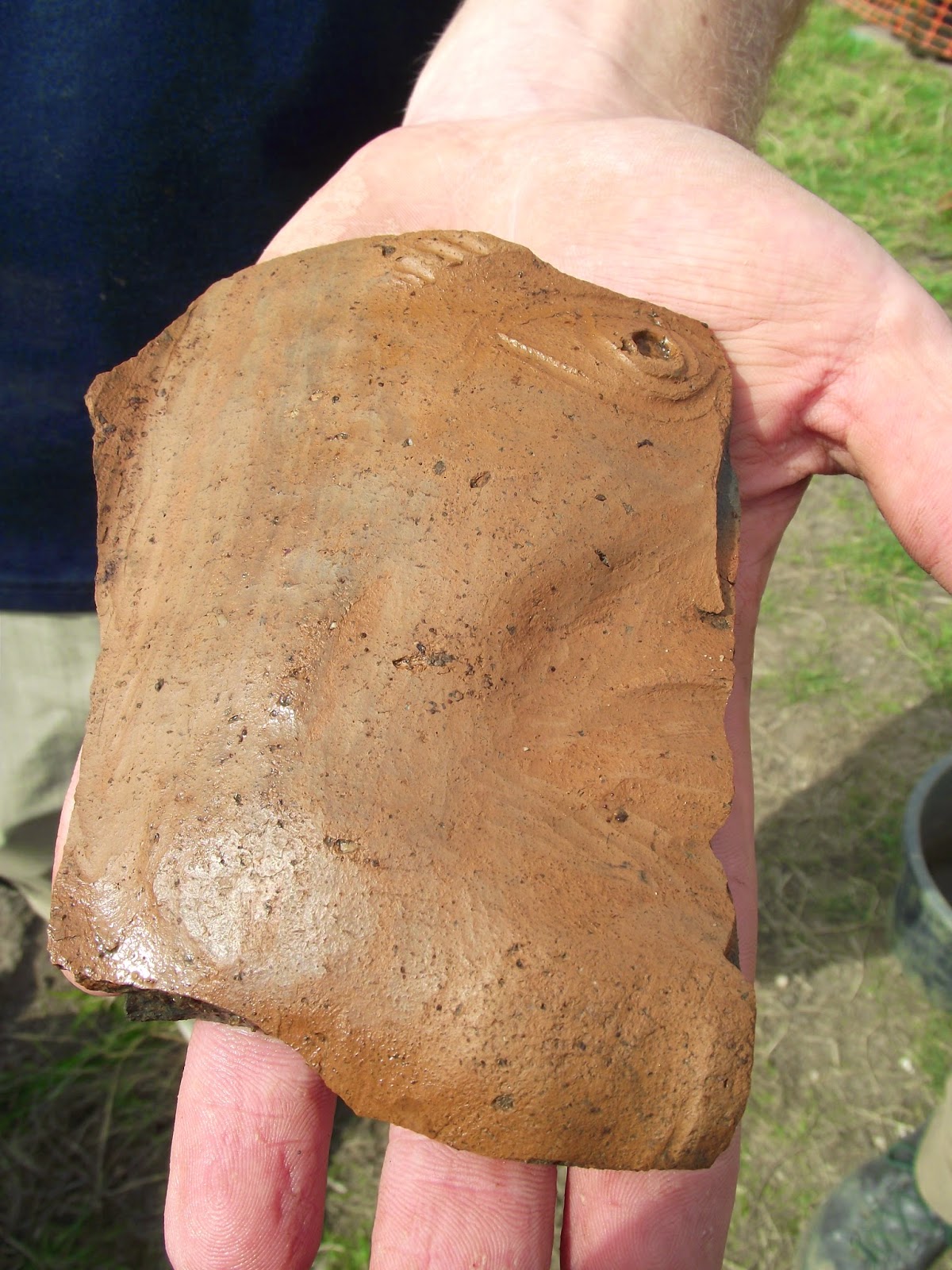 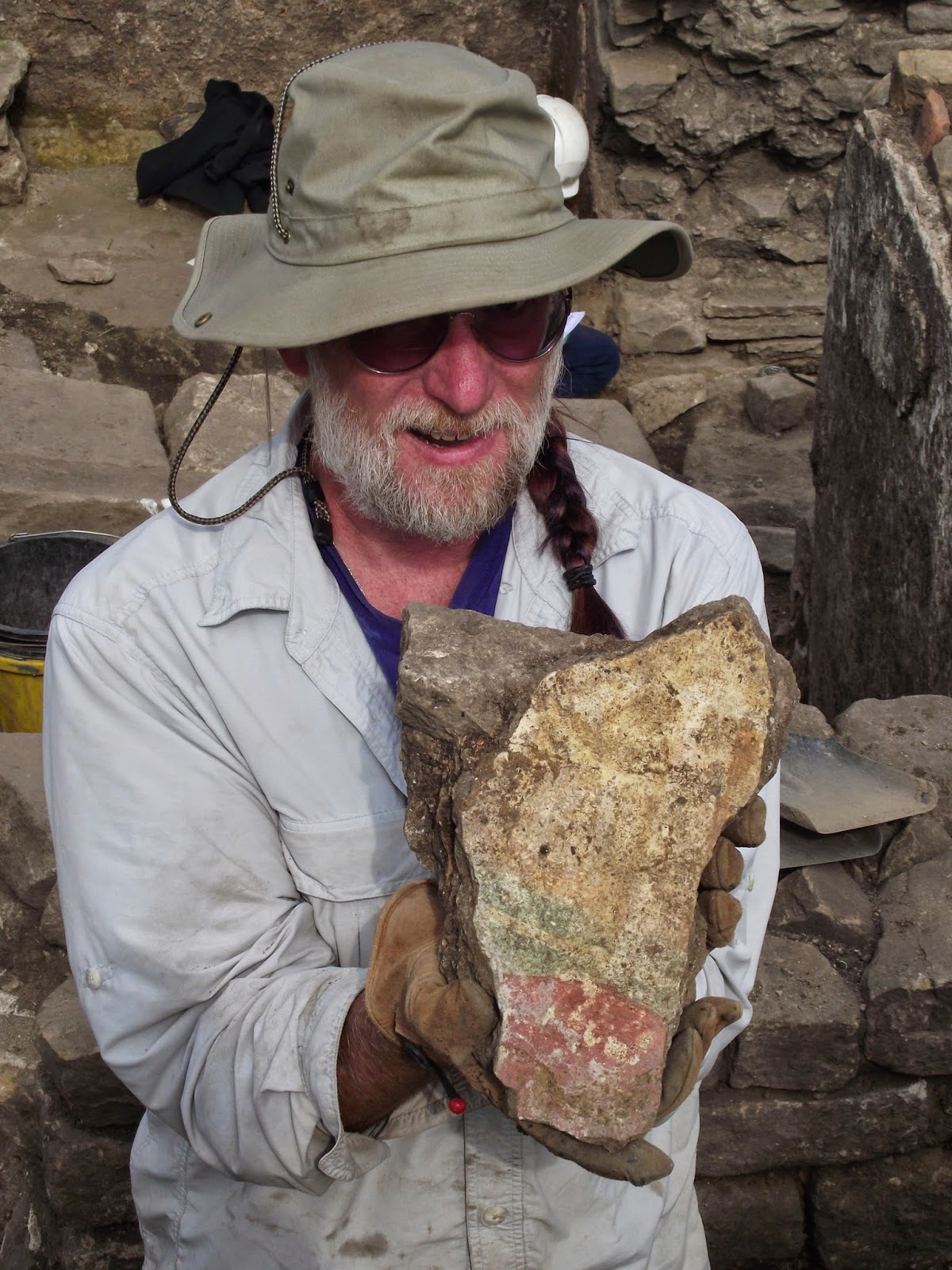 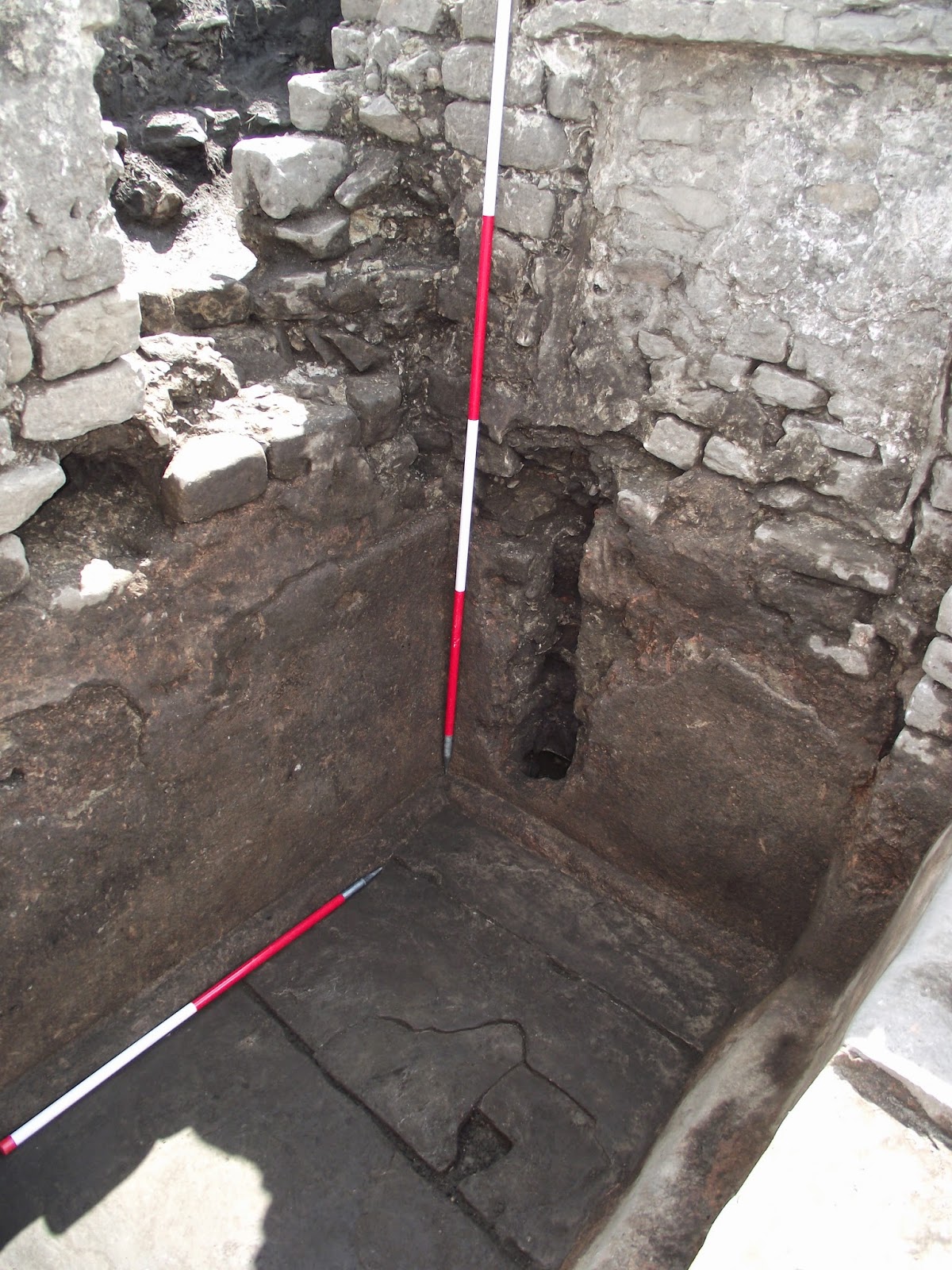 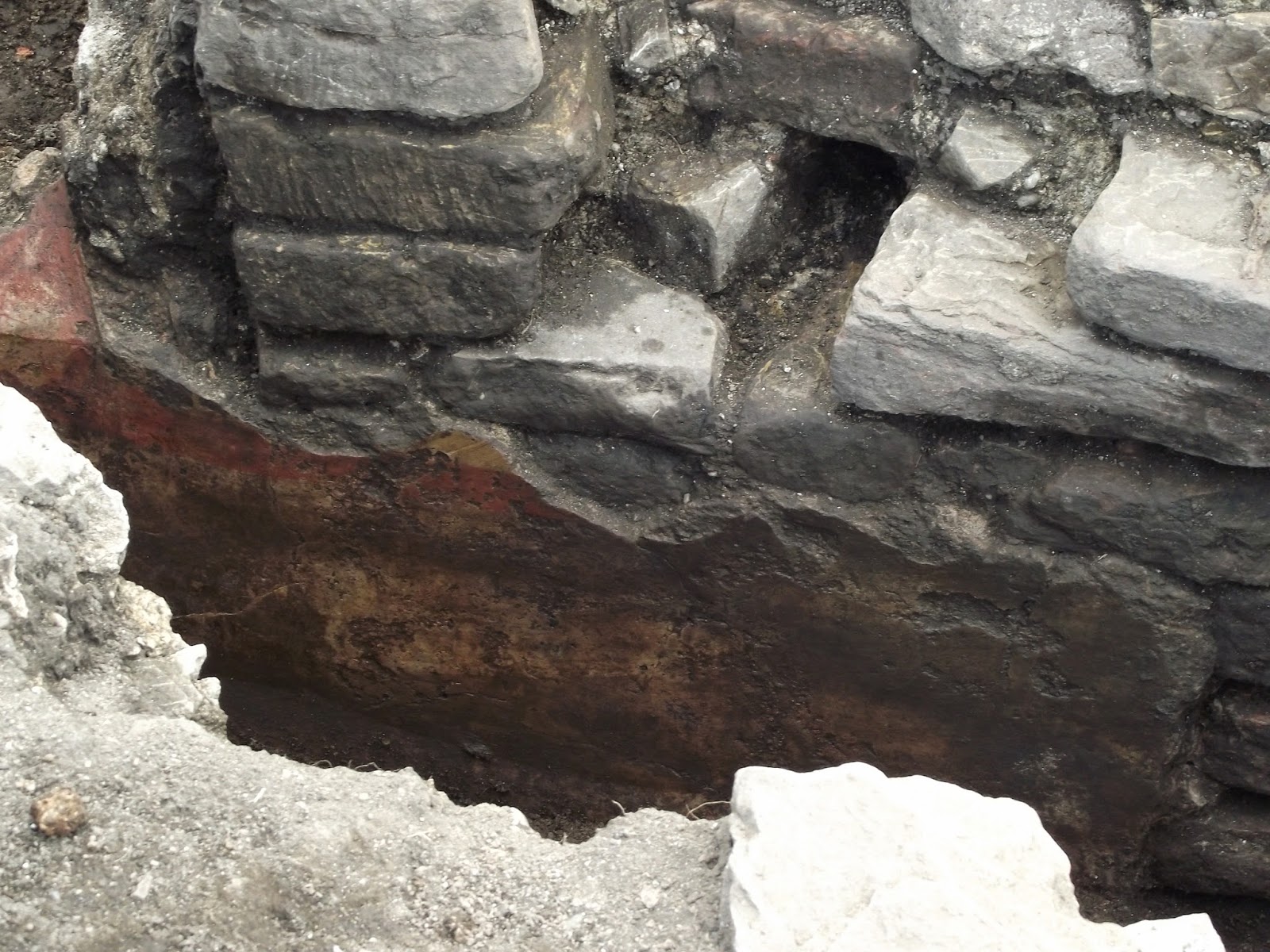 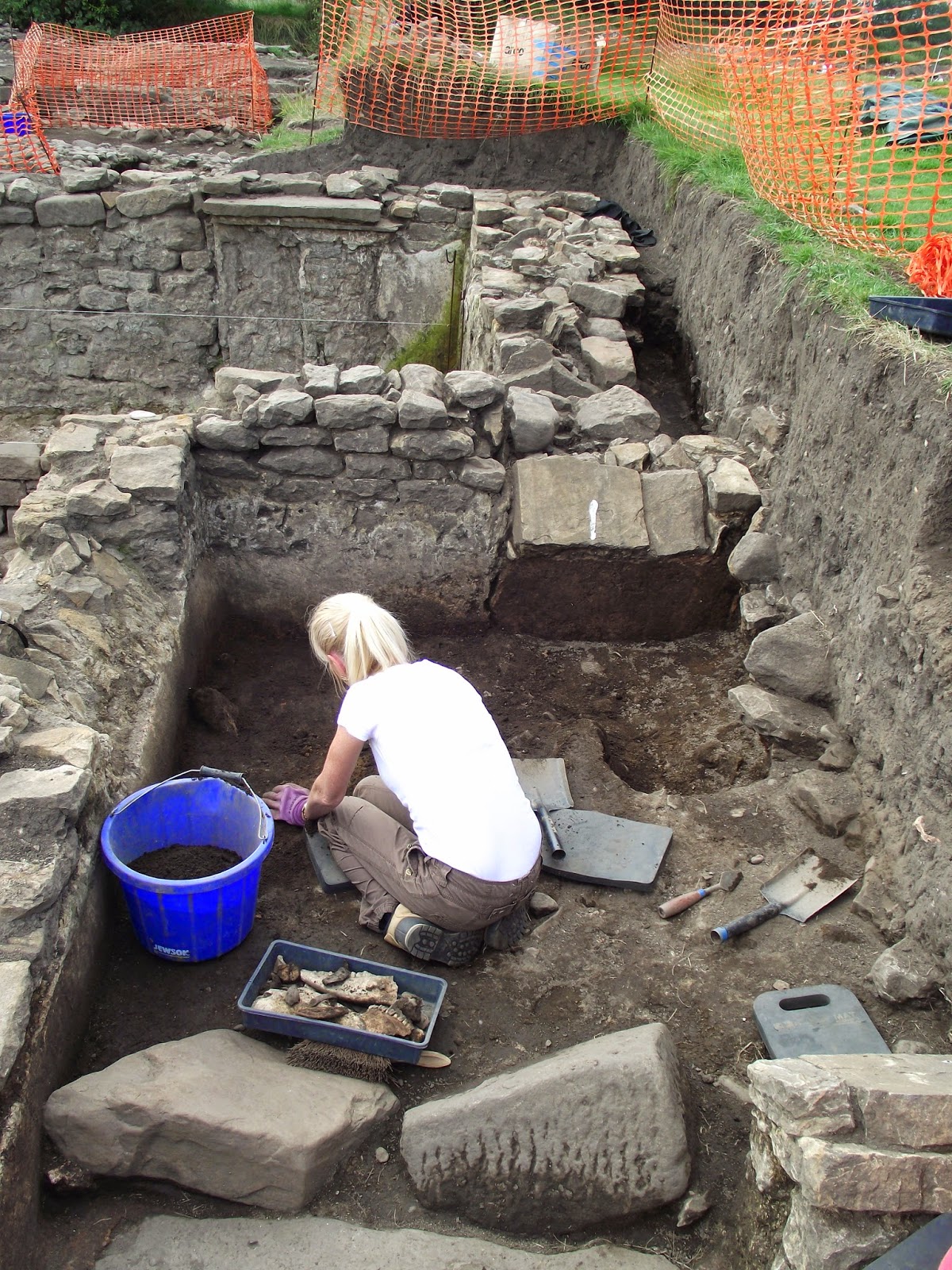