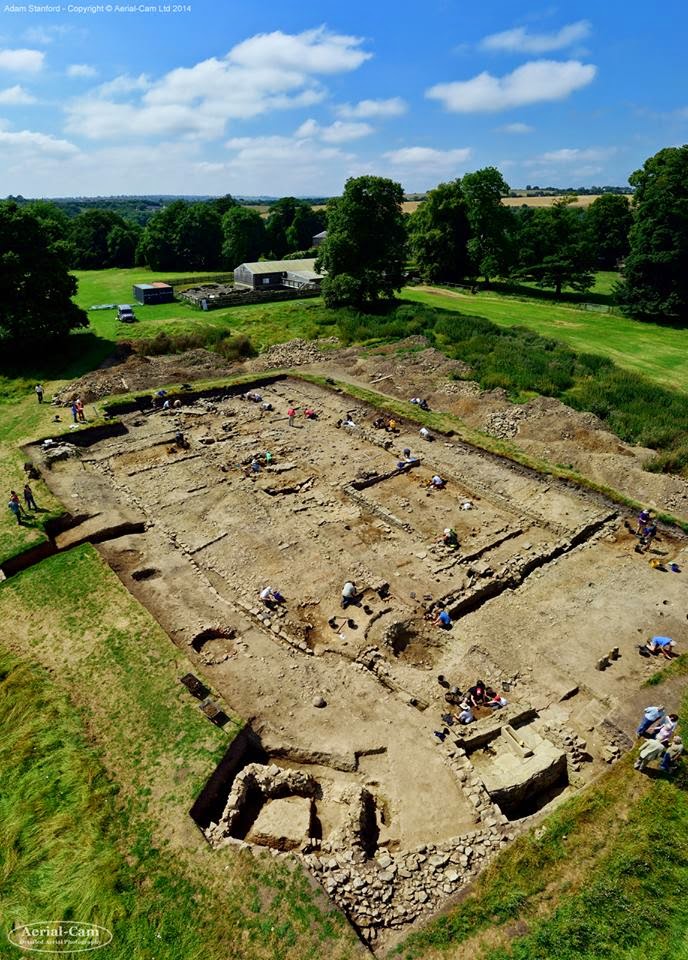 Friday was the final day of our 2014 season of excavation at Binchester. We’ve been out excavating for seven weeks now, and although I know I always say this, it’s been our best season yet.  Blessed by splendid weather, we’ve been able to really get stuck in to the archaeology on site, and have revealed stunning structures, amazing finds, and complex stratigraphy.

This is a good point at which to look back on our progress over the last couple of months.

In Trench 1, we knew we had traces of a large cavalry barrack that was at some point (probably in the 4th century AD) reduced in size to the width of a single room. At the northern end of this layer phase was a discrete officer’s quarters containing accommodation and a stable area. However, beyond this we had little sense of the detailed arrangement and organisation of either period of the barrack block’s use. It is now clear that the earlier phase conforms to the standard layout of auxiliary cavalry barrack of Roman date. We have uncovered a series of drains for horse pee, of varying dimensions and depths, which are more or less evenly spaces along the length of the building. This matches up nicely with the surviving hearths and paved pathways which are related to the contubernia (the soldiers’ rooms). We’ve also started to unpick lots of detailed features within the main structure including lots of stone lined post-holes and post pads; we will need to look at these closely in plan to see if they relate to putative internal wall divisions. Other nice internal features include a splendid set of gullies and carved stone drains in the officer’s quarters. We also recovered another votive baby burial tucked up against a wall foundation. In general, we have a much better insight into the varying nature of the walls of the structure. It is clear that many of the walls were rebuilt on, and the fabric varies widely. In one area, we may even have a stretch which was only ever a timber wall line. This varying is not unsurprising on late Roman barracks. We’ve also  started to realise the complexity of the constructional sequence at the northern end of the barrack. In the latest phase, the gable end abutted a stone-lined drainage gully. It is now clear though, that at an earlier phase, the line of the gable wall was actually about 2m to the south, and an earlier, cruder, stone gully was in place. The movement north of the northern wall led to a substantial reconstruction of the gully and its integration with the new wall line.

There was other progress in this trench beyond the barrack itself. Notably we picked up the curtain wall in both ramparts, as well as revealing the corner tower to its fullest extent. Interestingly, there was a clear difference in the construction of the eastern rampart, which must have dated to the earliest phase of the fort and had cruder stone fabric and large internal turf bank. The northern rampart wall was of far finer quality and lay much closer to the internal fort road. These distinctions between the walls probably reflect a chronological distinction in their construction.

We did relatively little work on the latrine, beyond finishing off the excavation of the bottom of the trench which revealed a stone lined base slanted to allow the sewage to drain into the conduit. The final major new discovery came to the west of the northern section of the barrack, where a number of new walls, were found. These are still not easy to understand and appear to be quite early, but do not look like barrack walls so far. 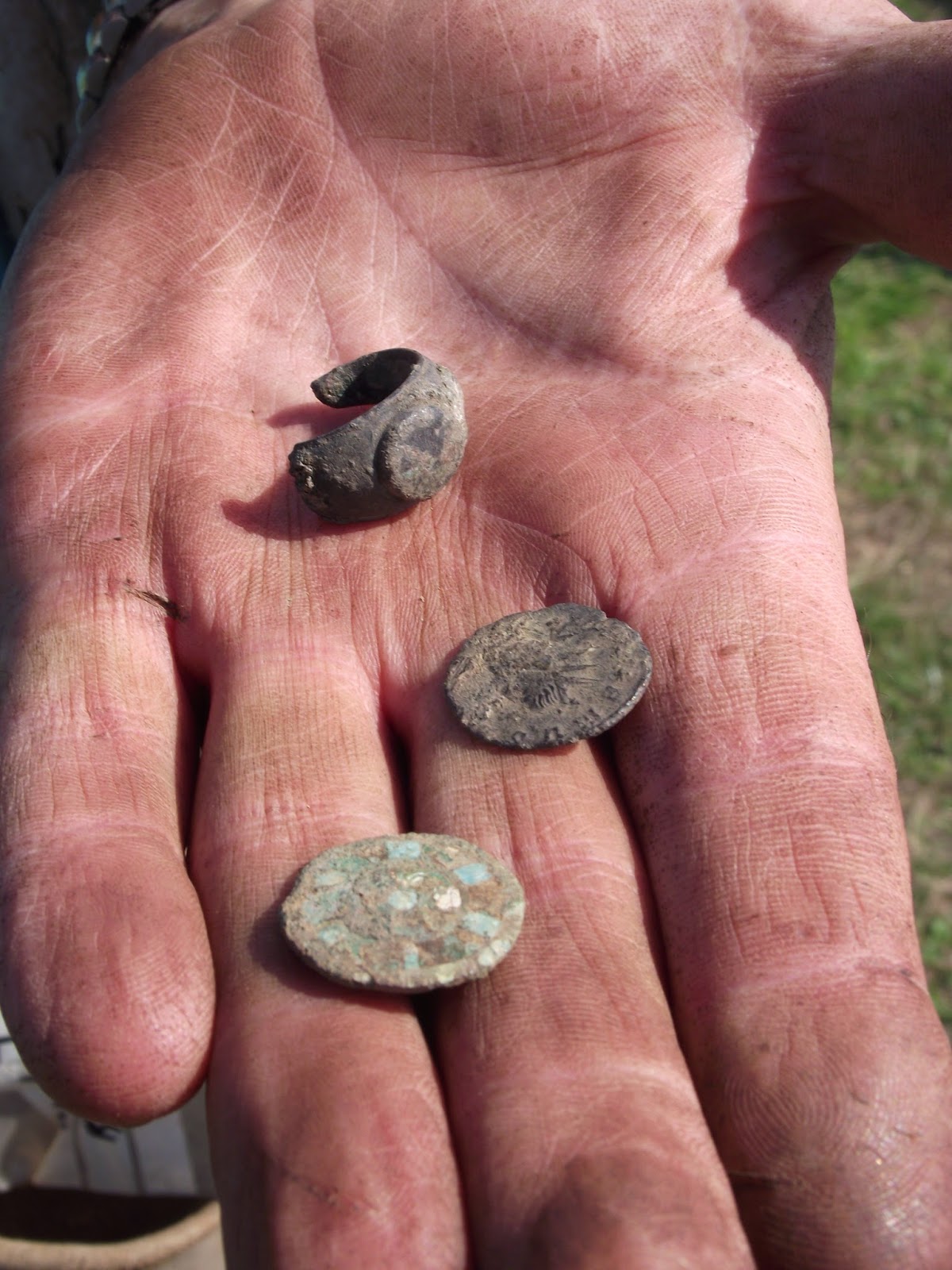 In Trench 2, the focus was not surprisingly on the bath-house. We fully cleared out the main room, which produced evidence that, in its earliest phase, the northern part of the room had contained a cold plunge pool. This had then been knocked out and the whole room lined with stone benches, marking a change of use from bath to changing room.  The altars found at the end of last season clearly belonged to this later phase, and were seemingly located in a small niche in the corner of the room.  There were a couple of other changes that can probably be connected to this change in function. The painted wall plaster of the bath phase was covered over with a thick white undecorated plaster. The circulation of space also changed significantly – several doors were blocked when the benches were put in, and more importantly in the north-east corner of the room, a new wall was put in place appears to have blocked off access to the area to the north. Towards the end of the dig, the area to the north of this wall was found to contain a lined bath or cistern with the remains of arch springers projecting over it. The northern half of the corridor had been cleared out last year, but this year we explored the southern half. The western annexe/alcove at the south end of this corridor was lined with opus signinum, but otherwise clear. However, the eastern annexe/alcove contained an wonderfully preserved small plunge bath, also lined with op sig. This suggests that something similar once stood in the opposite alcove. The eastern plunge bath had a “plug hole” at the bottom which appears to have debouched into a gulley that ran beneath the floor of the corridor. We still have to remove some of the late Roman refuse deposits filling part of the corridor including a roughly paved and kerbed stone path than clearly ran to the doorway in the central cross wall. To the east of the trench we also pulled our trench edges out a little to reveal that the main front wall of the bath-house continued easterly, with at least one more splayed window identifiable. We also have enough of the plan of the area to the east of the corridor to suggest that there may have been another large room, symmetrical  to the one we’ve cleared out. Initial work suggests that this contains well preserved plasterwork.

Although there has been clearly very important work in the bath-house, further excavation in the exterior of the building has helped us understand its preservation. This was most apparent in the discovery of the top of a very well built north-south wall between the bath and the strip buildings. When we excavated a pit that was dug up against it, we found that this wall was at least eight courses deep. This is the first indicator of the sheer extent of the rise of the street level during the Roman period. I’d always assumed the bath-house was so well preserved because it was partially terraced into the hillside. However, it is now clear that it was probably free standing in its earlier stage but got encased internally and externally by rising stratigraphy and big dumps of refuse, essentially protecting it from collapse.

Elsewhere  in the trench, we removed two buildings (the ones in front of the bath house) and found another one (a late strip building that partially overlay the new well-built north-south wall). It is clear that these must all be pretty late in date- probably later 4th century or even early 5th century AD, as they lie so high in the stratigraphy. There is also amazing variation in the construction techniques used in these buildings. One of the strip buildings we excavated in previous years had internal/external facing stones and was probably stone built. But the others were all various form of wooden structures with stone footings. These may either have acted as post-pads or supported beams. It is not clear whether this is a chronological issue. 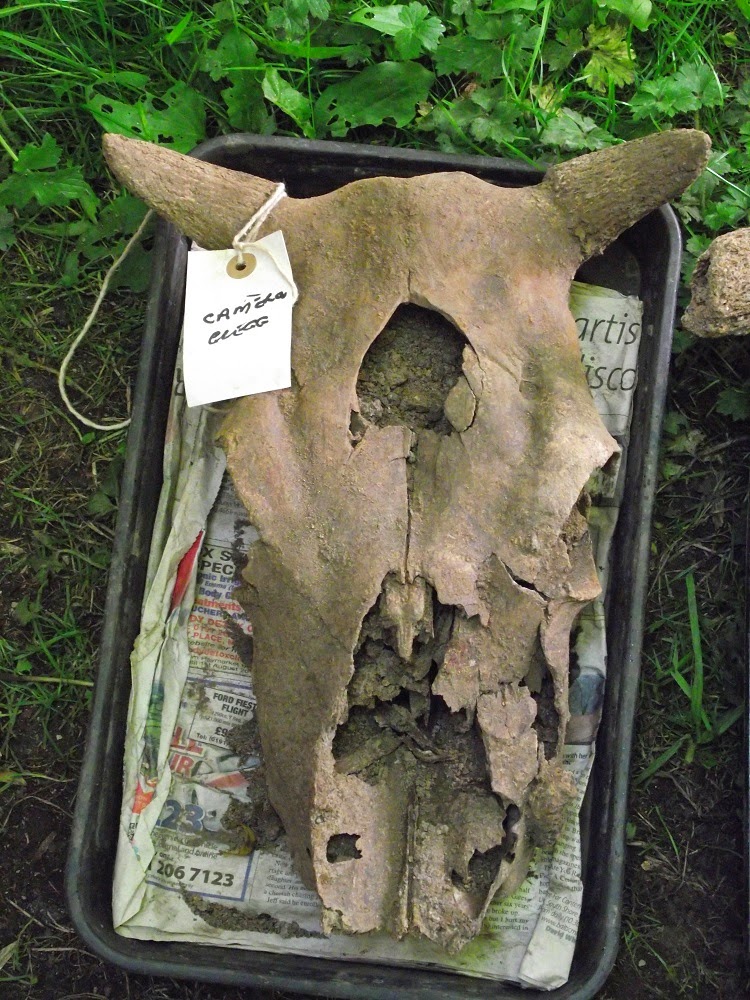 Finally, it is worth saying something about the finds. We’ve continued to find massive quantities of later Roman pottery , although the increasing presence of terra sigillata is a good indication that we are hitting earlier layers. There is also massive amounts of animal bone- mostly cattle, but with pigs, chickens and sheep/goats present as well. Small finds are plentiful – increasing numbers of well preserved brooches and mounts, some with good quality enamel decoration. Inevitably, there are many, many pins- some copper alloy, but also fine examples of jet and worked bone ones. However, because the site is so well drained we have no waterlogged deposits, so we have virtually no surviving organic material such as wood or leather.
Finally, of course, the highlight in terms of finds is the silver ring with the carnelian intaglio, which bears an early Christian symbol from Trench 1. This is one of the earliest Christian objects from Britain- the other being a very similar ring from York. It is intriguing that the earliest evidence for the Church is from the north of England and from clearly military contexts!

As usual there are lots of people to thank- Matt Claydon and Jamie Armstrong, our trench supervisors, Becca, Natalie, Tricia, Beverley, Janet and Tudor, our assistant supervisors. Peter Carne from Archaeological Services Durham University, David Mason from Durham County Council, Chris and Chris, the visitor assistants, as well as, of course, all our excavators, including groups from Durham University, Texas Tech, the Archaeological and Architectural Society of Durham and Northumberland folk,  Vinovia and Fulbright summer school crew, a small group from University of Highlands and Island, and many many others. We’ll all be back on site next year for our FINAL year at Binchester…