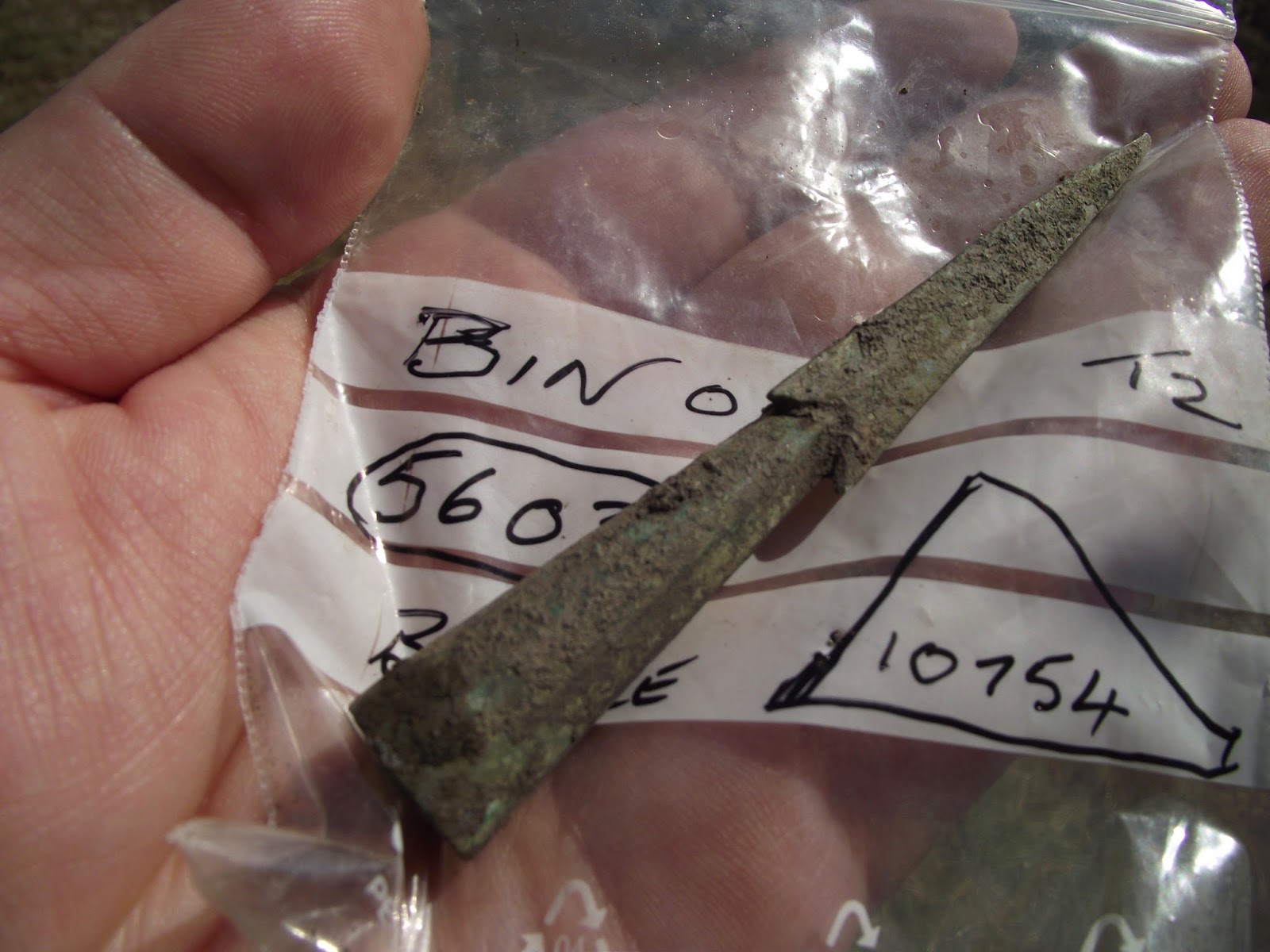 Apologies for the absence of yesterday’s blog entry- life just got too busy! Still, lots to report today. In Trench 1, we’ve been trying to get to grips with the complex sequence in the barrack blocks, particularly the relationship between the layers in the later structure and those in the earlier area. We have dismantled some of the spine wall to reveal some nice underlying cobbles- but are these a cobble foundation or traces of a larger cobble surface that have been ‘trapped’ beneath the wall. In the northern section of the building and the area to the immediate south, we’ve been tracking the nice metaled surface which seems to run beneath both and also to the west of the main west wall of the barrack. Whilst exploring this we've found yet more possible baby bones. In dismantling part of the western wall we’ve also found at least one post hole underlying the wall line. In the area to the east of the later structure, but within the earlier barrack we are starting to pick up a number of what might be further drainage slots for horse stabling areas, although this is not yet certain. We also have traces of another possible early cross wall.

In the corner tower, we seem to have removed most of the tumbled masonry and are working through a more consistent fill deposit. Just to the south, our large slot through the rampart has hit the foundation slabs of the inner face of the curtain wall- we've also got nice traces of a probable turf rampart appearing in section, as well more hints of interior slots or ditches which need clarification.  Apart from all this digging, Trench 1 is seeing lots of planning so we can start taking apart other key surfaces.

In Trench 2, we are still leaving the bath-house main rooms free, although some of the big guys in the new team have shifted some of the larger lumps of rock that formed part of the crude pathway in the corridor room. More importantly, they have also been cracking on with the removal of the topsoil and turf over the new section we’ve opened up (just to square of the trench and pick up any final hints of the plan). They have moved an impressive amount of material in just three days! In the building to the south of the bath-house, we’ve moved the final traces of the boulder walls of the later building and have also started to shift the underlying smaller building. This is helping show our nice clay interior, as well as pulling up yet more bone (including an impressively intact cow skull).  Margaret, working just to the east of the gable end, found a rather nice heavy arrow head or ballista bolt yesterday. To the west of the building the team are also picking up a rather nice flagstone floor that seems to run between the bath-house and the street front.

In the area to the west of the bath-house, it is now clear we’ve got  late rectangular structure. This clearly overlies the mortared north-south wall and has large boulder like footings very similar to the later building to the south of the bath-house. 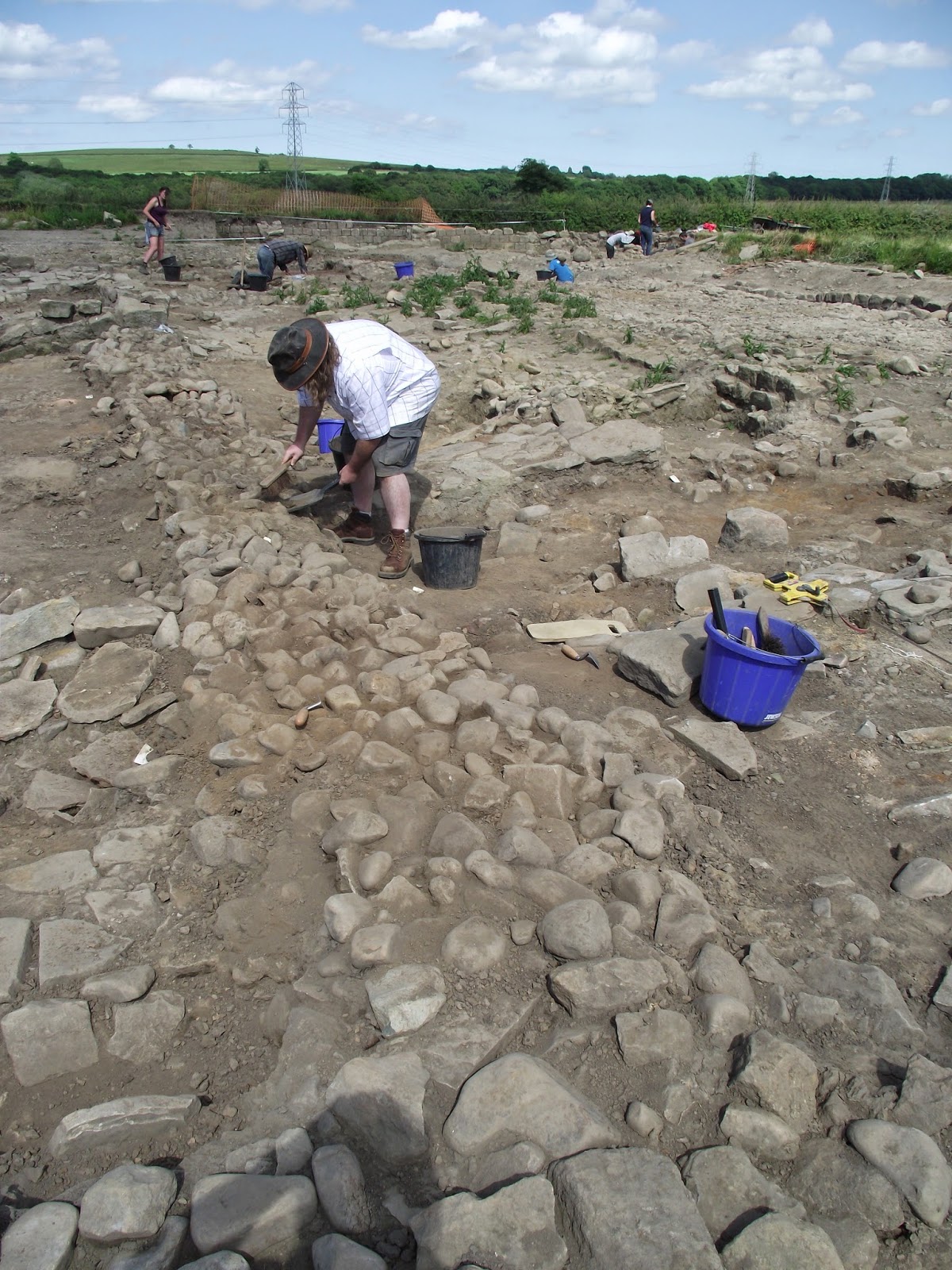 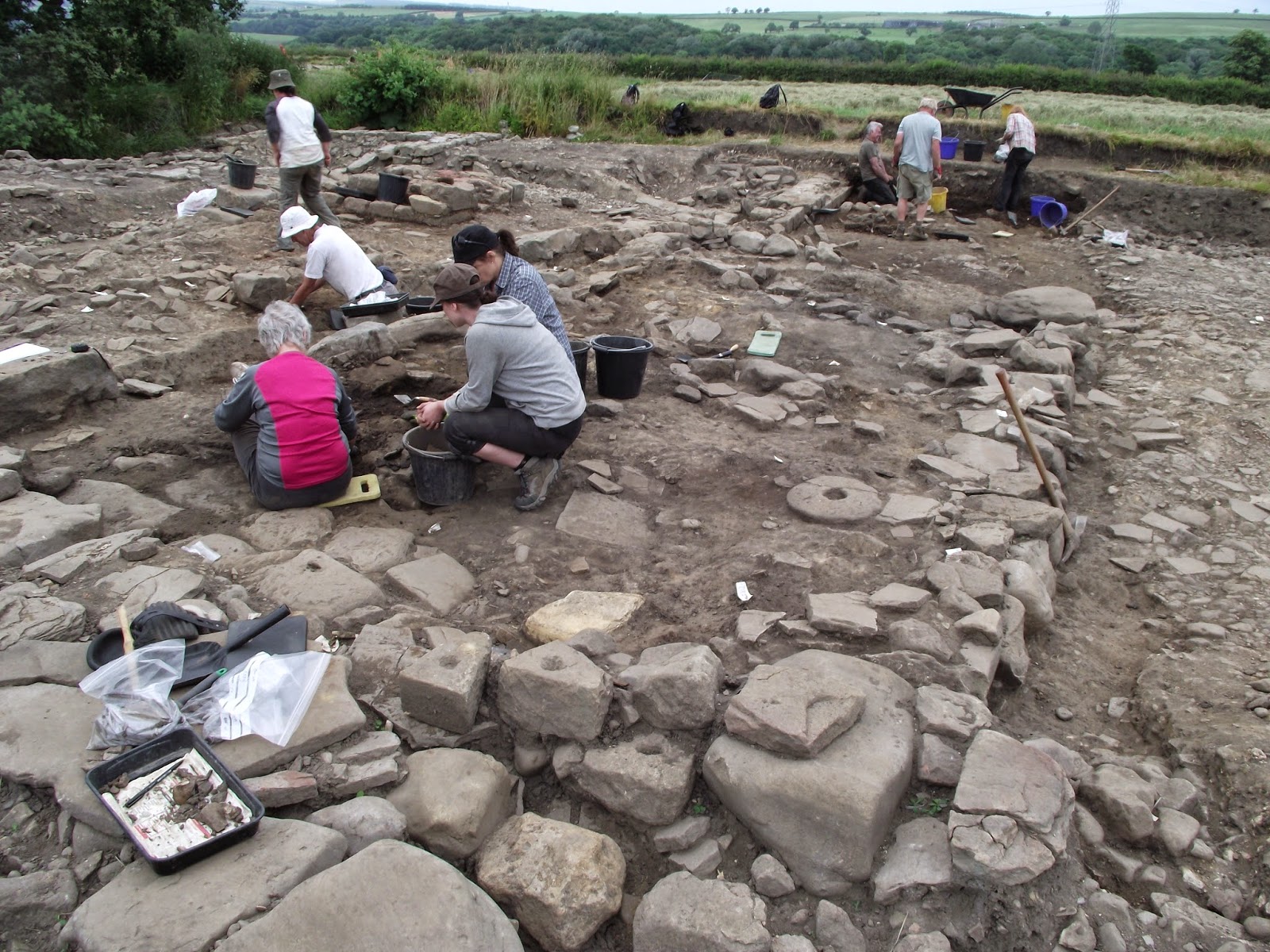 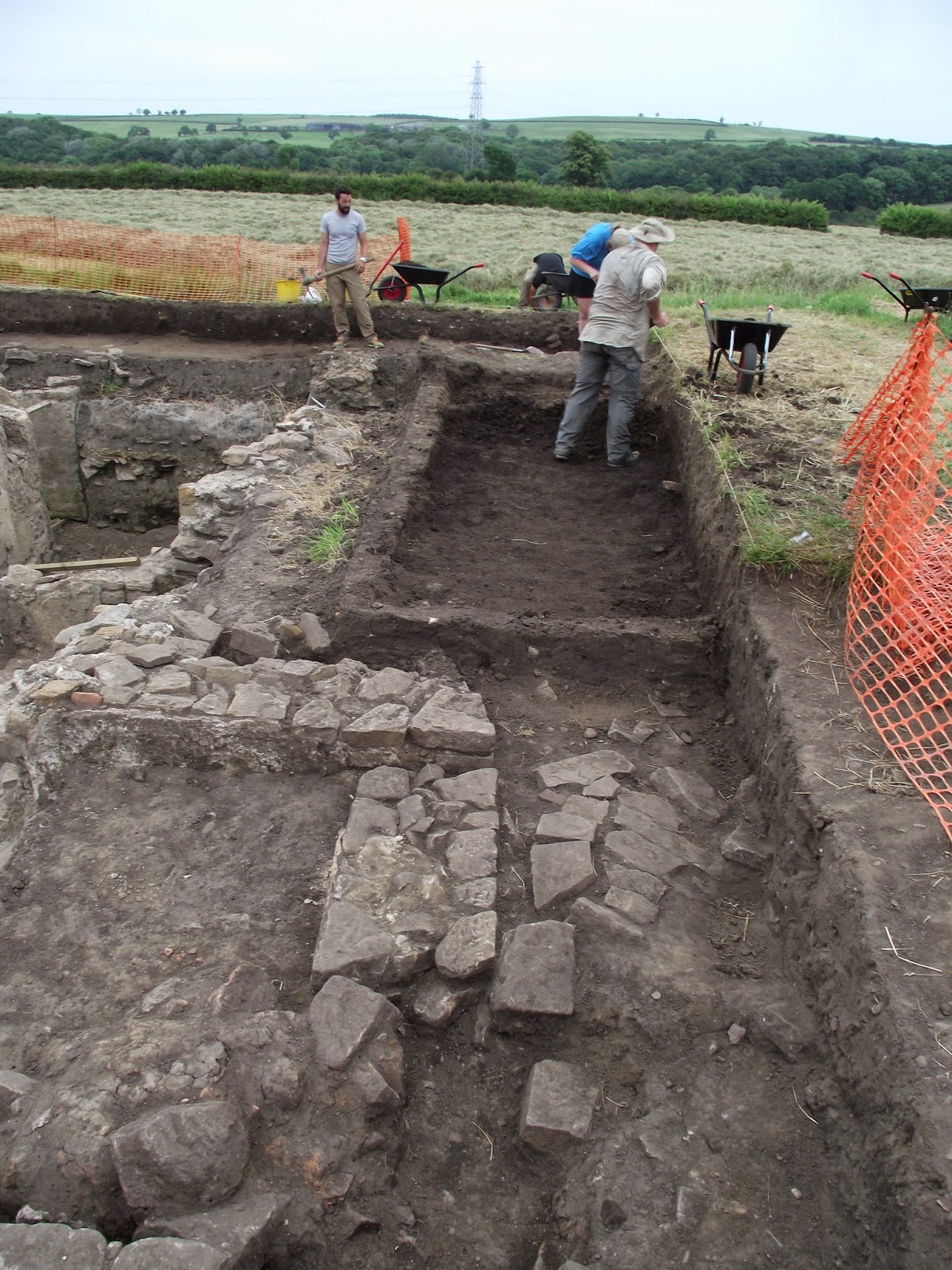 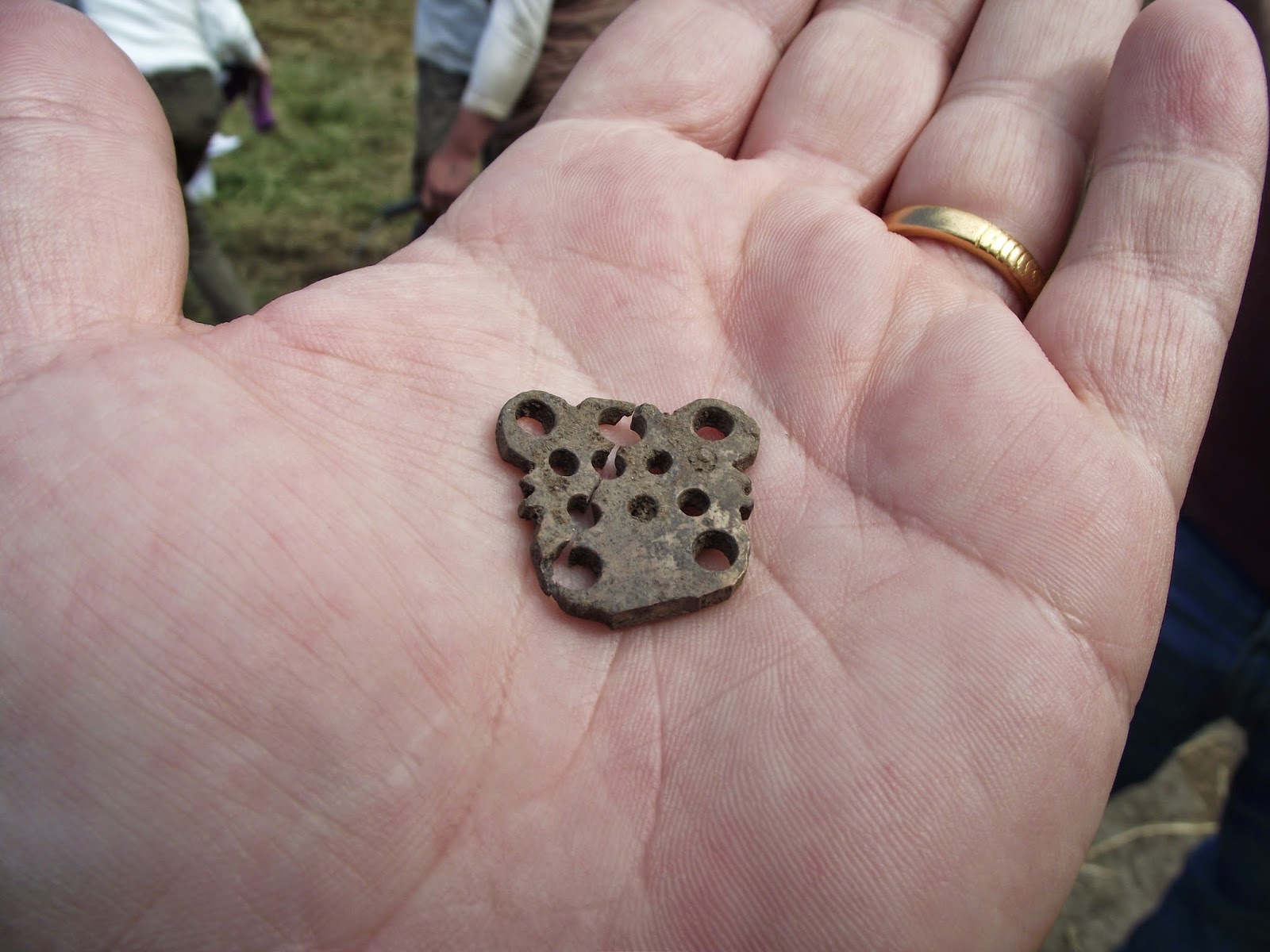 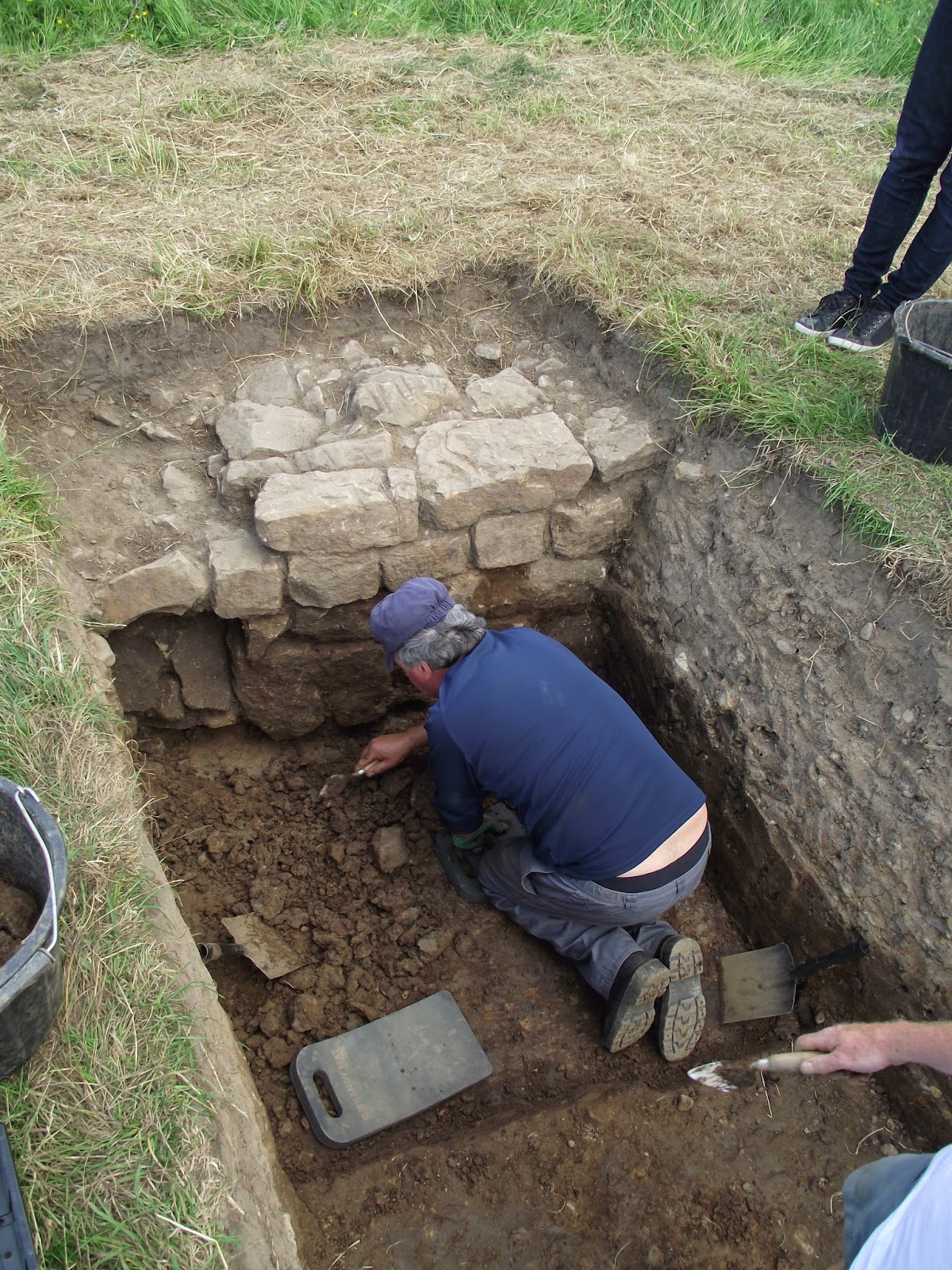