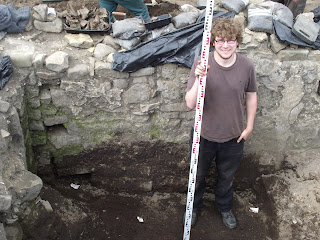 Apologies for the lack of blog entry yesterday - normal service has been resumed. We've had two busy days on site. In Trench 1, we've already nearly reached the stage where the area within the new wall is at the same level as the interior of the main barrack block. Just a little bit more cleaning and we're there. In the pit, Karen and Fabian are still edge chasing- once again, things seem to be getting a little more complicated in the pit that just keeps on giving... Yesterday, it produced a rather fine copper alloy bell! We've also seen fantastic progress in the new rampart building- which we'd barely started on last week. It is now all but completed- with the trough and the flagstone floor looking particularly fine. Fired up by our success we've had a poke around the remains of the interval tower further west along this rampart in the hope of finding more structures, but to no avail. Next week, we may take another look at the corner tower- although this will involve trying to move some large flagstones we gave up on last year. In Trench 2, it is looking like we may nearly have bottomed the corridor- finally coming down onto a hard (ish) floor surface, if not the flagstones we were expecting. The logistics of getting people and spoil in and out of this area are getting complicated- we're now relying on a ladder, with the ad hoc stairs coming out shortly. It is salutary to compare the depth in this room with that in the larger adjacent room- if its the same depth, we still have a serious bit of earth moving to do! However, we are still making good progress here; although much of this is inevitably focused on yet more stone surfaces. At the end of play on Friday we have had a couple of what looks like glass making or recycling debris, including glass seemingly bonded onto bits of pot (which at first we thought might have been glazed pot, which gave is a panic...). In the post-pad building, there has been plenty of planning and recording and now we are working on the interior again. It is clear that there are two, if not, three, phases to this structure, which is then overlain by a layer of stones that spills down into the main building. Nice to see clear evidence of stratigraphy and phasing. Finds this week included some nice pins and a possible stylus. 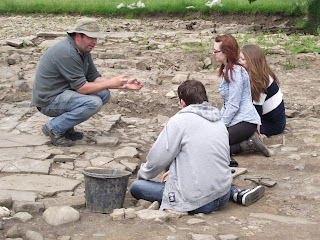 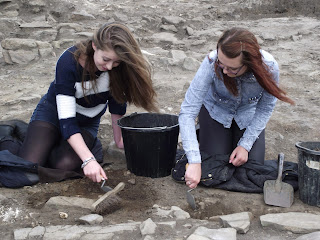 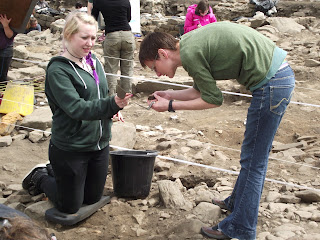 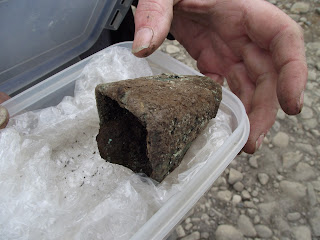 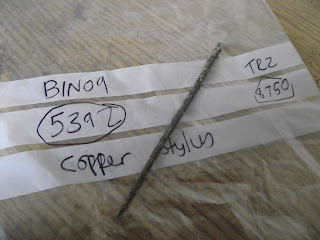 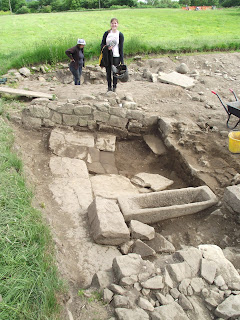 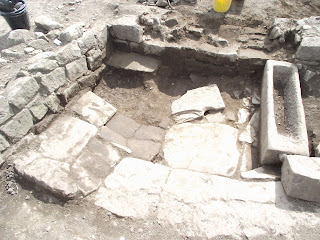