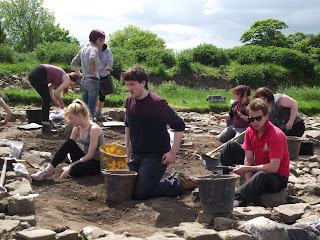 After last year's miserable weather it was great to start this season's work with lovely weather (and looking good for the rest of the week). Our Durham students arrived on site and we were able to get cracking more or less immediately after an introductory site tour. In Trench 1, we had a group of people working at the northern end of the barrack. Some were cleaning back from the line of the gully that lies to the north of the gable end and soon came down on (inevitably) another cobbly/stony surface. In the process of this they found a rather nice stone mortar or vessel. This is, I think, the third such stone object we've had so far. Nearby, others carried out cleaning back and revealed that the wall that forms the north gable runs westwards as far as our trench edge. I still don't really understand what this is about, I assume that there is an earlier phase of barrack surviving here. Elsewhere in Trench 1 we had groups cleaning back surfaces along the side of the barrack. Inevitably, we also had a small contingent trying to sort out the confusing, and possibly still medieval, activity at the southern end of the trench. In Trench 2, we saw lots of stone being moved! Most of the stone lining/flagging from inside the largest room in the 'bath' building was removed more or less straight away. In doing this we found a small blog of worked architectural stone. More pleasingly, the slight erosion of the northern section edge in this room revealed that the trench edge was actually sitting on the northern wall of this room- although there is a large gap, which may be an entrance or doorway. In cleaning this area up, David found a rather splendid little Roman copper alloy bracelet that looked to be of child's size (and defied by attempts to take a photograph of it). Elsewhere, more cleaning and tidying in between stony surfaces, so we can start getting them moved too. A great start to the season. 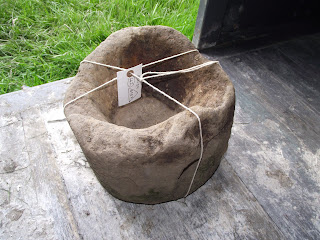 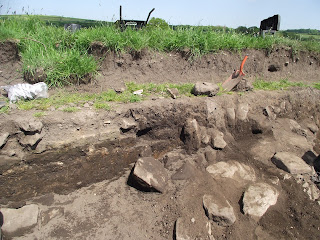 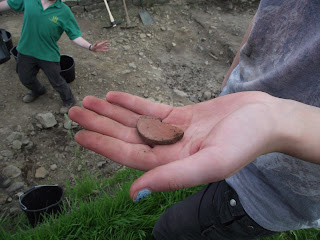