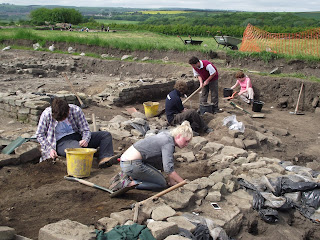 We are settling into a routine now, which is pleasing. Everyone (or nearly everyone) knows where they need to be and what to do. In Trench 1 we have cleared the entire gulley at the north end of the barrack. The only area of uncertainty is where it is presumably cut by Hilly's Pit, so we still have a couple of people trying to clean up and define this area in a little more detail. Along the side of the barracks, lots more slogging away at cleaning surfaces and picking away at the pits or hollows that still survive along the eastern edge of the building. At the southern end, stones are starting to be moved and planning is in the offing. Nicest find in this trench today was a copper alloy fastener found by Laetitia in cleaning the cobbled surface near the rampart. In Trench 2, much of the work has focused in what is essentially the interior of the post-pad building constructed in front of the bath-building. The flag stone surface identified yesterday is diving down to the north, and it seems that that large square hearth-like feature is sitting on this surface. It's chronological relationship with the post-pad building itself is not certain, but I'm currently assuming its contemporary. Co-incidentally, today we've had stone slabs with holes bored into them, presumably for wooden uprights found in two seperate locations. We've previously had one such stone forming the southern edge of the post-pad building, and was presumably in a secondary context. Today, Kate found a similar stone incorporated into the stone flagging within the building, whilst just to the north of the building and seeming underlying the post-pads, Gabby has found another, similar stone. Elsewhere in Trench 2, the interior of the large room continues to be removed, coming down onto a yellow-orange layer; no sign of the inevitable? next slayer of stones- have we reached the end of them? Also we now have a better image of the intaglio- according to Martin Henig, the stone is a red Jasper, Form F2 , and the device is a Crater , perhaps intended to be a Cantharus though only one handle seems to be shown. 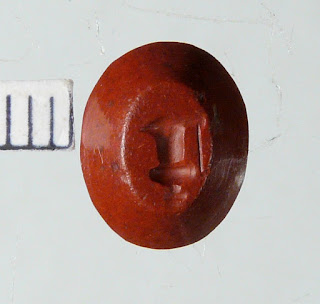 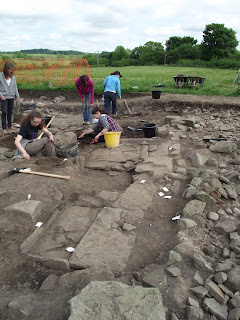 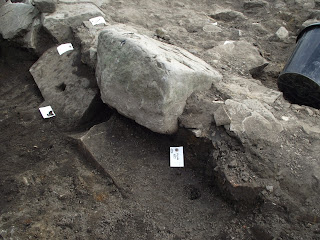 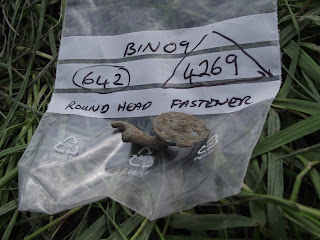