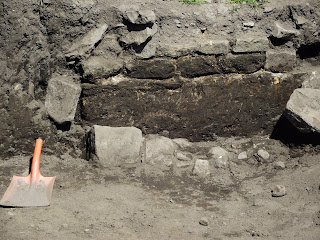 A second day of beautiful weather on site. We are already really motoring and our 1st year students are doing a great job. In Trench 1, the exposure of a cobble/gravel surface between the barrack and the rampart has continued apace, although the stratigraphic relationship between the surface and the clay of the rampart is still not clear. At the southern edge of the trench we've found more evidence of a wall that runs parallel to and to the east of the barrack. Its still not clear whether this a structural feature or just the edge of a drainage gulley to match the one that runs along the inside edge of the rampart. Elsewhere in this trench, its just been more cleaning back of layers onto surfaces and defining surfaces. Cameron has been busy cleaning up an almost complete cow skull in a pit, which he is hoping to remove whole. Nicest find of the day from this trench? A carnelian intaglio- the third we've had from this trench. In Trench 2, the removal of the interior deposits in the main building has been on-going. In the biggest room, the stone lining has been taken out and revealed a lovely dark deposit which has allowed us to get stuck in with mattocks and shovels. As the level of this interior fill has gone down, another blocked opening (window or door) has started to appear - this time in the western wall of the building. Lots more work going on in the latish post-pad building that stands between the main building and Dere Street. We've now got a flag stone surface, although it is not clear whether this is a floor to the structure or an underlying pavement on the street frontage. Outside the trenches, we were also visited today by Faye Simpson from MMU and .... one of her Phd students. They are working on a project to explore the impact of excavation on happiness - this kind of research on the way in which working on excavations affects peoples wellbeing is new stuff, but potentially of great importance. I'm hoping to persuade Faye or Abbey to contribute a blog post to explain more about their work. 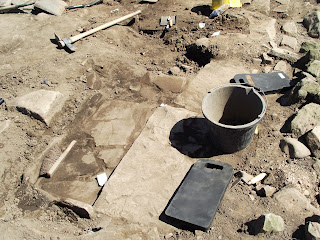 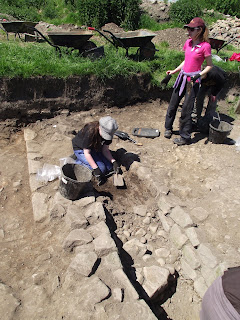 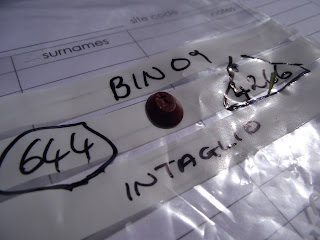 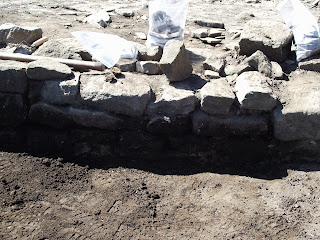