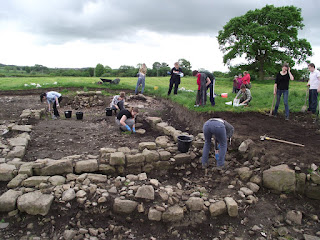 We are finally back out on site. Thanks to the Jubilee, we’ve started a couple of days later than normal, but this morning the Durham students started at Binchester. Not surprisingly, after the initial introductory talks, our priority was basic housekeeping. The main task was weeding the site. Despite the cover of tarpaulins we put over our trenches in the winter, there was still quite a bit of intrusive shrubbery that needed to be hacked back, as well as leaf litter to be cleared. Luckily, with so many (50+) hands on site we were able to get most of this sorted by lunchtime, so by 2pm we were able to crack on with the archaeology itself. In Trench 1 (the fort trench), our main focus has been cleaning back a very small new area at the southern edge of the trench, which we’ve opened up to reveal the junction between the later rectangular building and the associated area of revetment. Great progress has already been made on this, a range of finds are already being recovered including a rather nice lead spindlewhorl. Elsewhere, the main task was removing the last overlying areas of darker earth that were still lying across the site. This meant that a number of groups were deployed around the outside the main barrack to tackle these. We’ve also got some students clarifying the situation in the northern compartment of the barrack, and a group starting work on cleaning back from the rampart down onto the northern most extent of the possible road drain to see if they could find any more of it. 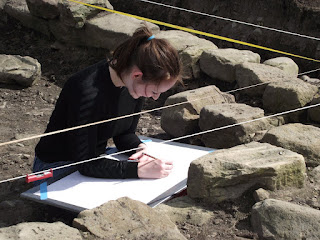 In Trench 2, we have a small group working on elements of the strip building. In the clearing out of the flu within the eastern strip building Nixon found a nice jet spacer bead. Next to him, we had a couple of people working on cleaning up the interior of the neighbouring structure, particularly the internal oven. The bulk of the rest of the people in this trench were either deployed to take back the northern edge of the 18th century ditch slightly to see if any Roman structures could be identified coming through in the section, or clearing up the slightly extended balk edges. We’d expanded the trench very slightly to the north and east for practical reasons, as the interior of the trench was starting to get quite deep, so we wanted to add steps to the balk for safety reasons. All in all, we hit the ground running, and given this morning’s forecast (which predicted rain) we’ve got off scot-free on the weather front (although tomorrow is looking pretty grim). 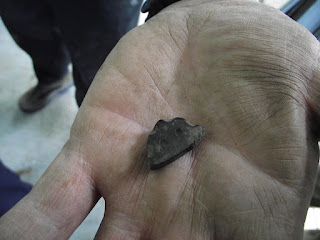 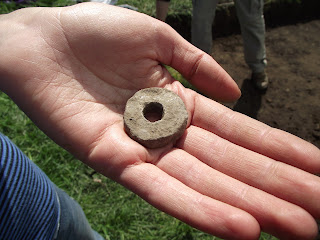