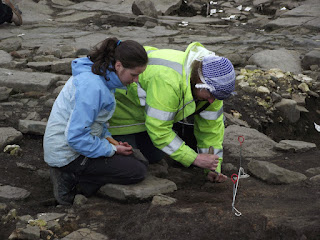 Another busy day. In Trench One we finally started dismantling the small rectangular building. The north wall has now gone. Significantly, we found green glaze pot within the wall itself. This finally confirms beyond all doubt, its post-Norman date. This means that much of the associated revetting is probably of a similar date. The associated oven is also probably a medieval structure rather than a Roman one. It is of a different build to the Roman bread oven further down the rampart and sits on the clay rampart rather than being built into it. Despite all the people we are throwing into it, the corner of the fort remains resolutely confusing. We are, however, beginning to identify the edges of the rampart near the tower and a number of substantial flag stones are emerging too. Elsewhere, the northern compartment of the barrack is being planned with a little furtling around the edges. Intriguingly, during the pot washing that took place on Friday, a number of sherds of 'pot' that had been recovered from one of the pits along the western edge of the barrack turned out to be fragments of skull. They looked suspiciously human, so I showed them to our palaeopathology people in the Department who confirmed this. The bones consisted of an area of the rear of an adult skull. This now leaves the mystery of why there are fragments of human bone alongside butchery waste within the fort. In the late Roman period burials would not have taken place within the fort, and the nearest known cemetery of any date is a good 100m away. As the fragments were from a sealed context, they must have been placed there in the Roman period and were not a later intrusion. A key job now is to double check the other bone from this feature to see if there are any other fragments of human bone. In Trench 2 it was a quieter day. Nixon and Ong were drawing and recording Building 1, Nearby Sean did some more excavation and recording on the oven in Building 2. The very clear stoke hole I mentioned yesterday turned out not to be so simple and still needs to be further unpicked. Otherwise, there was a lot of work on the central area cleaning around the stone layers and slogging away removing some of the content of one of the bigger pits, whilst at the far end of site, work continued cleaning around the big building.
Posted by David Petts at 14:19