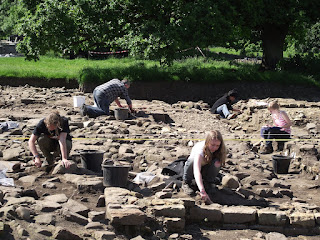 Beautiful weather today; ideal digging conditions, although don't know how long they'll last. Trench 1 saw lots of planning, with most of the excavation focusing again on the eastern tower. Natalie spent much of the day probing the edge of the earlier antiquarian trench to try and identify its limits. Elsewhere, Cameron and Jonathan were working the area between the wall stump and the tower. Lots of bone and Jonathan found not one but two probable Roman brooches! There was continued work on the site of the medieval structure cleaning the cobbles. In Trench 2 lots of planning and decision making! Tomorrow, hopefully, we'll be able to move a lot of the cobbles and stone surfaces in the central section of the site (probably revealing more stones beneath them!). Elsewhere, those working on the two pits within the large building have done really well, and crucially confirmed that there is a real channel or hole through the wall between the two sunken features (see picture below). Still needs a little more work- is it just a door? At the other end Ong is still quietly tackling the mysterious flue in Building 1, whilst Sean is methodically getting to grips with the oven in Building 2. Otherwise, not much to report, although I did have the pleasure of taking the very enthusiastic children of a primary school from Richmond round the side. They had lots of interesting questions and were very good at pretending to be Roman columns! 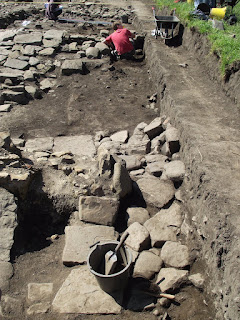