Another beautiful day on site- although looks like the weather will turn tomorrow. Once again though we made great progress. In Trench 1, Tom removed the eastern wall of the medieval building as a reward for doing so much trowelling. All that survives is the southern wall. All in all, there are a number of features in the immediate vicinity of this building that appear to be of a similar date. There is obviously the probably corn drier, but also another smaller oven build over the main barrack could stratigraphically contemporary. It is also possible that the small stone feature to the north sitting on top of the rampart maight also be connected. COmbined, these are a nice set of medieval features of probably 13th/14th century date. When I get a chance to hit the library I plan to chase up parallels; luckily Durham and Teesside are quite well provided in excavated medieval buildings which should give plenty of comparanda. In the eastern corner, there was lots of planning around the tower and its related features. Cameron and Jonathan finished off the area between the tower and the shorter stump of wall to its west. The latter clearly survives to at least three courses. In Trench 2, the stones in the centre of the trench began to be removed revealing for once, an underlying area that currently appears to be largely devoid of stones or cobbles. It appears though that this underlying layer continues into the interior of the large building; its relationship with the internal pits is not clear though. In the eastern-most room, Will and Danny have done a great job; they've exposed what appears to be yet another stone lining to the large pit. The stones are almost vertical and quite straight- an excellent demonstration that these features are not simply areas of slump, but deliberately constructed linings. Todays artefact highlights- lovely fragment of shale (not jet) bracelet and some lumps of raw shale found by Nixon near the roadside ditch. Ong found a couple of really nicely preserved coins in the flue he is working on in Building 1. Only two days left of the Durham students time at Binchester and so much still left to do! 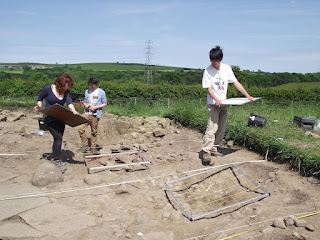 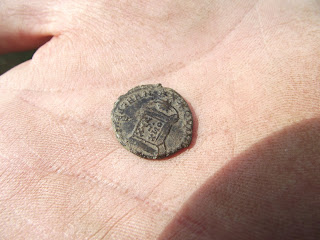