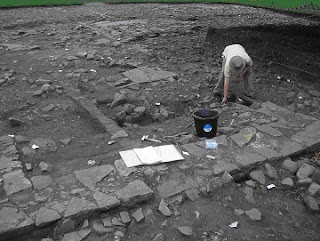 I'm off site for a while, so over to one of our volunteers David Mien for an overview of today's work

"This was the first day without the American students, so the trenches were sparsely
populated. However the twenty or so community volunteers continued the good work under what was a leaden sky, though happily the rain held off.

In the fort trowelling was the order of the day, with no planning taking place, a complete reversal from Friday when ten students and volunteers were doing this. There was, in true Time Team fashion, near the end of the day the discovery of a stone lined circular feature, which bore similarities to a feature already excavated. Hopefully tomorrow some further details will emerge which I will pass on. Some large cattle bones were also found and they may have some relationship with the large skull excavated a week ago.

The vicus trench contained only five volunteers, who again largely trowelled, and one of whom made the best find of the day. This was a large coin, which may be similar to an earlier coin find, and although some aspects were faintly discernable, careful cleaning in the laboratory will be required. The excavators mainly concentrated on an 18th Century gully and the day here ended in some planning and no further discoveries."
Posted by David Petts at 11:38