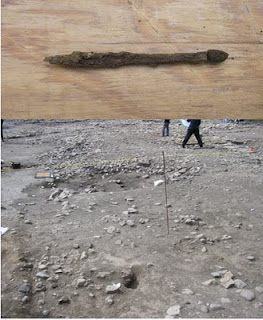 Nearly the end of the excavation and there are enough volunteers, together with Janice and Jamie, to ensure that the planning will be completed on time. Some volunteers are still trowelling in the fort but Matty is careful not to disturb the areas that have been carefully planned. However, the site still had a little of the Time Team Theatricals, because late yesterday afternoon a great find was uncovered. It was a knife, about 10 inches in length and although found in the higher levels of the site, it is thought that it is Roman in origin. Obviously this has still to be confirmed after conservation, but it may well be one of the finds of the season.
Since the find may be so important it is worth considering where it was discovered. In the second photograph the indentation can be seen near bottom centre, where the knife was excavated at an angle of 45 degrees, very close to the surface. Interestingly in the background lies the “pit”, which makes one wonder what will be discovered here and indeed throughout the site next season. Today there were a few finds, mainly pottery, and a very small bead, so the excavation gives up its’ goodies right up until the end.
Posted by David Petts at 13:47