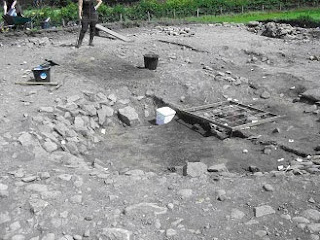 The second day with only the Community volunteers excavating continued steadily. The weather again was good, amazingly no rain, and the twenty workers completed work uninterrupted. Interestingly for the second day running another twelve groups of visitors were shown round the site by the supervisors, so their day was more hectic.

In the fort, and indeed the vicus, the volunteers combined planning and excavating, with the planning aspect becoming more important as the season ends. The fort saw more features being developed, and the large pit identified much earlier in the excavation, now having a smaller pit within it. Two other pits have been excavated, one containing a number of nails and perhaps carved stones. We are still in the later phases of the site and will now have to wait until next season before going deeper. The workers in the vicus were busily planning and excavating the features in the northern area and more information should soon be available about them.
Posted by David Petts at 01:08