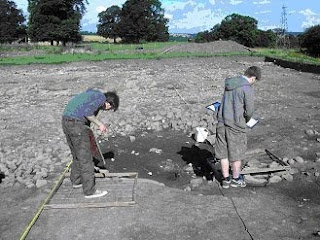 More from David M. "A fresh batch of volunteers arrived, so the number of workers was greatly increased and showed the popularity of the excavations amongst the local community. Only the fort was open and the vicus looked a sad prospect with no-one actually there, after so many weeks in which it was a hive of activity. Matty ensured that the volunteers had plenty to explore and it was in the eastern section, that had previously provided a number of hob nails, in which the largest number of volunteers were deployed. At long last the “mystery pit” was planned and it is hoped that when all the data is collated the actual feature will be identified and put into the context of the site. Again more visitors arrived on a day in which the weather was extremely mixed."
Posted by David Petts at 12:25