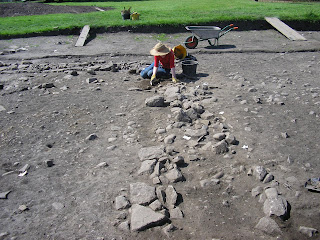 Another contribution from David Mein

" Another pleasant day with no rain and plenty of sunshine.

There was a full complement of volunteers so work on much of the site was possible. The re-examination of a possible medieval feature, after it had been planned, uncovered a number of finds such as samian ware, Roman glass and domestic pottery.

Close to this feature a number of volunteers trowelled the area and a Roman loom weight was found in excellent condition.

Throughout the site pottery, from a range of periods, has been found and on the spoil heap the team of metal detectors have been able to assist the archaeologists by finding coins which in many instances are miniscule.

Towards the North West of the site the wall, uncovered some time ago, has proved most interesting. The wall has been cleaned and a door way may have been discovered, and close by work has commenced on a possible hearth.

Volunteers are also working on several other features which still need to be carefully examined before they can be interpreted."
Posted by David Petts at 10:46