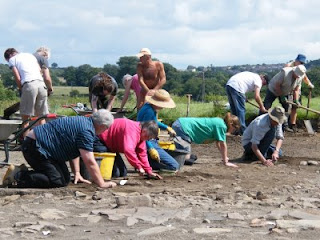 Although the Stanford team have now departed, the work is far from over on the site. Today saw the arrival of a fresh new group of volunteers drawn from the local community and members of the Architectural and Archaeological Society of Durham and Northumberland. Despite the horrendous rain on Friday which saw extensive flooding in and around the area the site was in pretty good condition. Twenty fresh and eager faces lined up this morning for a site tour followed by the inevitable ritual enjoyed by all new arrivals on site: cleaning back! Hopefully, over the next few days we'll be able to get the final remaining elements of the site cleaned up enough to define any remaining features. Once again the process threw up finds, including lots of Roman pottery, several coins and more jet beads! Meanwhile, over in the far north-west corner of the site others started to define the area around a small stump of walling that could be seen projecting from the north-east rampart.
Posted by David Petts at 13:33