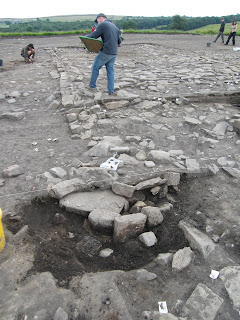 I can’t believe it’s the end of week four. We’ve had a good week and made lots of progress; lots of areas have been cleaned with surfaces and features exposed, planned and photographed. Next week should see the excavation of lots of cut features. Key developments today include further work on the floor surfaces at the north end of the main building and the discovery of tiny red glass bead of probable Roman date from the cobbles to the north of the smaller structure. More cut features are being recognised within the road surface, though as some of these appear to be filled with stones and cobbles they are proving difficult to define. Elsewhere on site we actually started removing some stones! This makes a huge change from simply revealing new ones…. Over the last two days we’d been attempting to define the edge of a large circular dump of stones that appeared to cut the line of the south-eastern portion of wall of the main building. We finally located the cut and have begun to remove some of the stones. We’ve had a working hypothesis that this was a pile of rubble remaining from robbing out the wall; we guessed they’d taken the facing stones and dumped the less useful rubble core back in the hole. However, on taking these stones out it is clear that the feature contains some good quality facing stones, so it is unlikely to be related to the harvesting of stone from the site. We’re not much further, however, in actually guessing an alternative function, though it is clearly medieval as it contained a number of fragments of medieval pots. We are also coming down onto an underlying layer containing lots of charcoal and burnt bone; is this a rubbish dump? Possibly, but why go to all this effort to put large stones over it? Hopefully next week will bring an answer.
Posted by David Petts at 12:54