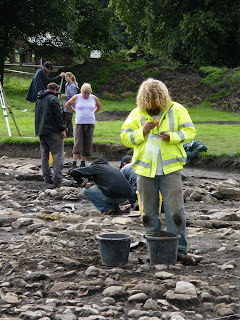 More rain today, but not enough to stop work! Lots going on at the moment. Most importantly, we are finally removing some of the cobbles. This is exciting after everyone has spent so much time carefully cleaning and planning them- of course, we've simply revealed more cobbles beneath them, but its a start. They are coming off in two area; the big lump over the smaller building and in the cobbled area to its west. I'm hoping that when we remove enough material we'll identify some occupation levels in the small structure, which would hopefully allow us to get a better handle on its date (currently anywhere between the 5th and 15th century). Elsewhere, Jamie has been carefully exploring the flagstone floor in the centre of the main building; this is revealling a clay layer in which it seems to sit; there area also possible features cut through this clay. The large stone-capped pit is still expanding and as confusing as ever; it produced a small fragment of hand-painted eighteenth? century pottery, suggesting it is more likely to be of post-medieval than medieval date. Finally, there has been more excavation of the large feature in the south of the building; although this is where we missed the cut seperating the earlier (late Roman?) from the later (post-medieval?) feature, we've now revealed a set of stones in the base of the feature which appears to define the edge of the earlier activity area. Apart from this, its been more of the usual range of activtiy: planning, levelling, cleaning cobbles and pot washing.... Only two more days before the Stanford team return home.
Posted by David Petts at 10:44