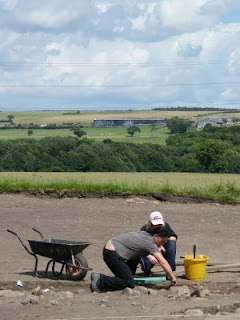 Despite poor weather forecasts we got a solid day’s work done today. This morning was dominated by digging features, particularly in the northern section of the main building, including further work on a number of possible post-holes. So far these have contained late Roman pottery, indicating a good, late/sub-Roman date for the activity here. Further south, the large copper alloy object was lifted, though it’s in very poor condition; it will be difficult to effectively conserve it, though we may able to get an X-ray of it. The large stone-capped pit has continued to produce medieval pottery and, late this morning, a lovely iron object; either a knife or half a pair of shears. On the eastern edge of the site, a number of post-holes have been excavated on the rampart. We have also been exploring the stretch of wall that we had assumed was the eastern end of the off-alignment building. However, we’ve been unable to find any evidence for a return of the wall; given that it is at a higher level than the other walls it may in fact be an entirely different feature. The eastern wall of the building may instead be buried beneath the large heap of rubble.

This afternoon was very important for us as we were visited by a significant number of archaeologists from the region; it was a kind of unofficial open day. Our visitors included several specialists on Roman military archaeology so we were keen to hear what they were going to say. The main result, as far as I’m concerned is that everyone was happy that the main structure was of late Roman date, rather than anything much later. Whilst this was what we’d been assuming, it is very idiosyncratic in nature, so it’s nice to have our suppositions confirmed. There was also consensus that the off-alignment building was probably post-Conquest in date. Finally, after looking at the deposits in the stone-capped pit, Andrew Millard, noted that there appeared to be evidence for medieval industrial residues.
Posted by David Petts at 12:31