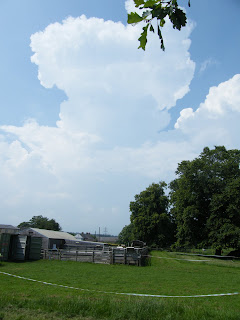 Thunderbolts and lightning, very very frightning! A hot morning followed by an afternoon of constant thunder although the heavens only opened minutes before the end of the day. We've made great progress, with everybody really getting stuck in despite the muggy weather. The most progress has been made on exposing the northern end of the barracks structure. Cleaning back has revealed traces of a probable surface in certain areas, although there are certainly later features cut into it. Intriguingly, the western wall in this area is very heterogenous in character (as well as being anything but straight). It looks like a bit of a 'friday afternoon job'. The northern end of the structure may have been added on to the main building at a later date (although this is far from certain). There is also evidence for phasing elsewhere in the structure now, one of the w-e cross walls is clearly butting the long western wall and is not bonded in. Excavation to the western side of the west wall has produced what is either a slightly earlier stage of wall on a slightly different line or alternatively a possible off-set foundation. On the eastern wall, there is a stretch of 'two-ply' wall which rather than having a rubble core with facing stones either side, instead has the usual two facing walls, but an internal wall within the rubble core; presumably at some point a normal wall was altered or supported by a further course of walling. Elsewhere this wall peters out entirely, presumably robbed out. All in all a great day throwing up lots of challenges; it is clear that there is a lot of alteration to the structure following construction including additions, phases of robbing, new surfaces and features cutting them. Lots to do tomorrow. 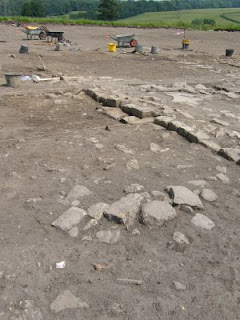 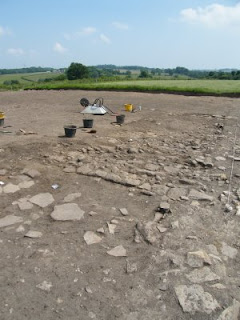 More areas of new wall
Posted by David Petts at 10:34