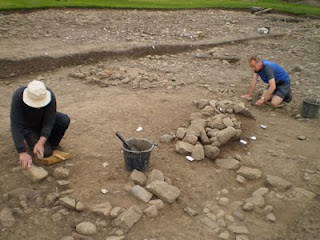 Another contribution from David M.

"Anyway today went quite well with the rain holding off until about 3 o'clock and that was only a short shower. There was a strongish wind which was drying the site out and again making trowelling difficult.

The possible medieval feature surprisingly produced a number of Roman finds and one of the volunteers within minutes of trowelling near the road found a Roman coin in good condition. There were a number of finds in the central area of the site including a red bead. This was made by Katie who during the week has now found a red and also, earlier in the week, blue bead. Progress has been slow at the possible bread oven but in true Time Team

fashion Janet was able to identify features late in the day. Some of the volunteers have also begun to plan the features, so all aspects of archaeology are being addressed by the members of the excavation"
Posted by David Petts at 12:34