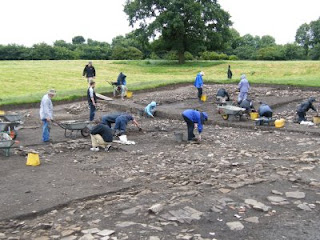 A fairly brief update today as I've been off site most of the day. The key developments are clarification of what's happening in the northern end of the main building. Further cleaning has revealed a series of cut features including a possible stone-lined beam slot. This appears to be lines using thin slabs of stone and is strongly reminiscent of the lining of the post-hole in the adjacent late/sub-Roman sunken features. This suggests that it too is of a relatively late date. Elsewhere it is becoming increasingly clear that there a series of features cut into the roadway. The gully excavated yesterday is quite substantial and clearly at an angle to everything else on site; there are also a number of possible pits appearing We need to make sure we take environmental samples from them. Full update on progress tomorrow.
Posted by David Petts at 14:06