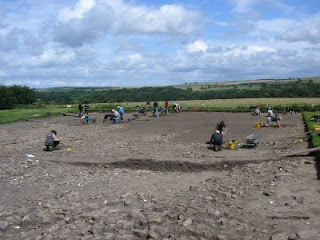 Another contribution from volunteer David Mien

"Another pleasant day on the dig with a new group of volunteers joining the excavation. The weather was warm and sunny with a light shower at lunch time. There was also a breeze which although made conditions good to work in, tended to dry the surface and so trowelling was at times difficult on the firm surface.

Work continued in the centre of the site where perhaps a post Roman building has been found, though this is difficult to establish, hence the amount of trowelling in this area. A loom spindle was discovered here and later in the day a coin.

On the rampart section a feature is visible and work continues to establish whether this is a bread oven, built into the rampart.

I'll post some new images from David when I'm back from holiday (DP)
Posted by David Petts at 12:32