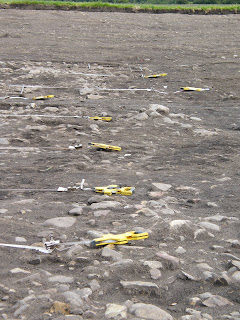 End of week 2! This week has been harder than last week, not least because of the weather. The key task for the latter end of the week has been cracking on with the planning of the site. As much of the site consists of spreads of rubble and cobble surfaces, often intermingled, this process has taken some time. Also, as this is a training excavation, each student has had to be taught the principles behind planning. However, excavation has continued elsewhere on site. Today we commenced to half-section the second of the large dark features that lay inside the barrack block. The first of these features has, so far, only produced late medieval ceramics. So far this has not been repeated in the newly excavated feature, which is, however, producing reasonably large quantities of animal bone, including the sawn-off tip of a deer antler. Significantly, this feature has produced no medieval material, only Roman pottery and a 4th century coin, so it seems likely to be late or sub-Roman.
Posted by David Petts at 12:27