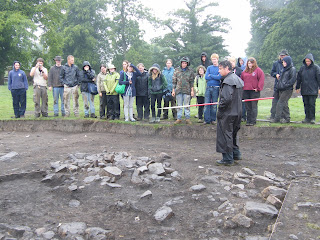 We've come to the end of week three; this is also the point at which the initial workforce of Durham 1st year archaeology students leaves. They will be replaced on Monday by a new team, consisting of a contingent from Stanford (US) and a motley group of Durham undergraduates and post-graduates. They will be taking work on the site forward over the next three weeks. The final day's work for the first years was marred slightly by persistent drizzle in the afternoon, nonetheless work continued apace. There were no major developments. We began to take out the second section of the late/sub-Roman feature- this produced two coins and an iron buckle in the space of about two hours. Work continued on the med/post-med feature though we're still not certain of the relationship it has with the stretch of wall that has appeared within it. The bow-sided building is now even clearer, which is pleasing. Finally, over by the rampart, a thorough cleaning and the cutting of a section confirmed that the rubble/wall line cuts the clay of the rampart and is clearly a later pahse of activity (perhaps a late Roman/post-Roman refortification?) and is not integral with the construction of the initial rampart phase. A really big thank you must go to this initial team, most of whom had no experience on an archaeological site before they arrived. However, thanks to the fantastic and profoundly tolerant (!) supervision of the team from Archaeological Services have done a really good job from a standing start. 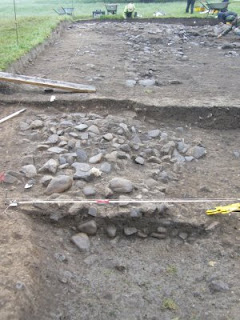 The rubble/wall/revetment cutting the rampart material (on left of picture). Looking south.

I've also realised that so far, although I've talked about daily progress I've not provided much information about the position of our trench within the fort or given a plan of the trench. So here goes.... 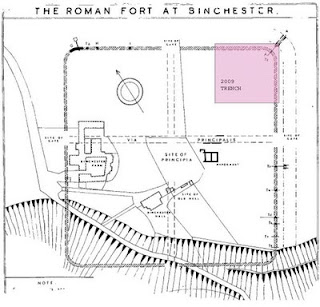 The position of our trench is marked (not to scale). You can see it lies in the eastern corner of the fort, to the north of the Via Principalis. The excavated site of the commandant's house and bath-house lies to the south-west of us. The map shows clearly how much of the west of the fort is overlain by Binchester Hall Farm and Binchester Hall. It is also easy to see the damage to the fort caused by landslips, as the scarp slope of the plateau collapsed into the River Wear (though this stabilised in the 20th century). 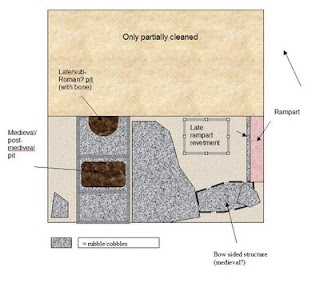 This is a very approimate plan of our trench I've knocked up this evening. It shows the broad configuration of the site at the moment. The northern half of the trench has been stripped but will require further cleaning before we can see much of what is happening. In the southern half of the trench is a building running more or less n-s (this is using site north, which is to the top of the plan). This is presumably a late Roman barrack block. The walls are less well preserved than the plan suggests, with some stretches robbed out entirely and other areas containing dumps of rubble, presumably the rubble core from walls dumped after the facing stones have been robbed. Within this building are two major features. To the north is the roughly oval feature containing cattle bones and late Roman pottery. This has either built up on an area of subsided floor surface or is in a pit/scoop lined with re-used flag stones from the surrounding floor. To the south of this and the other side of an internal wall is the larger feature which has contained large chunks of late medieval pottery and a little post-medieval material, including clay pipe. Not shown on the plan, within this feature is a stretch of north-south wall parallel to the long walls of the building. In the south-east corner of the trench is the bow-sided building on a different alignment to the barrack block. This is surrounded and possibly partly overlain by cobble surfaces. There is a particularly large cobble dump at its east end, which has yet to be removed. We've not found any floor surfaces connected with this building yet. Finally, to the north, is the stretch of rubble and wall, which we believe forms a revetment cut into the clay rampart. This appears to be robbed out in places; a fragment of medieval pottery from the rubble associated with this robbing is medieval giving us a rough idea of when this robbing took place. Just to the west of this (Not shown)are two stretches of rubble that could either be the ephemeral traces of a building or just two stretches of rubble. This is obviously a very simpliefied overview; the key thing to remember, is that running around, and in places over, both buildings are large areas of very heterogenous cobbled surfaces. Some of these may be collapse or demolition material, others may be proper occupation/activity surfaces. Time will tell. Hopefully though, this rough plan will help readers get a better understanding of the broad contours of the site and better understand my blog postings.
Posted by David Petts at 13:55